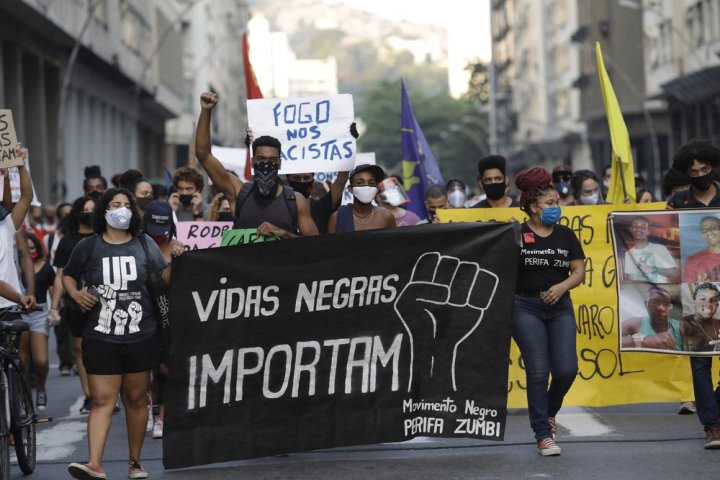 When Rafaela Matos saw police helicopters over her favela and heard gunshots, she fell to her knees and asked God to protect her son, João Pedro. Then she called the boy to make sure he was OK.

“Be calm,” João Pedro wrote back, explaining that he was at his aunt’s house and everything was fine, Rafaela told The Associated Press. Minutes after he sent the message, police burst in and shot the 14-year-old in the stomach with a high-caliber rifle at close range.

João Pedro Matos Pinto was one of more than 600 people killed by police in the state of Rio de Janeiro in the first months of this year. That’s almost double the number of people killed by police over the same period in the entire U.S., which has 20 times Rio’s population. Like João Pedro, most of those killed in Rio were black or biracial and lived in the city’s poorest neighborhoods, or favelas.

As the Black Lives Matter movement brings hundreds of thousands to the streets around the world, demonstrators outraged by João Pedro’s death one month ago have been organizing the largest anti-police brutality demonstrations in years on the streets of Rio.

Still, the protests are nowhere near the size and public impact of other countries. To protesters, their struggle to gain momentum in the country where more than half the population is black or biracial, with a police violence problem that far overshadows other nations, is evidence of the depth of racism and complacence.

“They kill teenager after teenager in their homes every day. We’re here because we need to be,” 19-year-old civil engineering student João Gabriel Moreira said at a June 10 protest in Duque de Caxias, a poor city in the Rio metropolitan area. He said he had never protested anything before this year.

“Kill a young black man in a favela, it’s seen as normal — he must be a drug dealer,” Moreira said. “Racism has always been veiled in Brazil. That’s why so few of us are here. If Brazil had racial consciousness, this street would be filled.”

Rio de Janeiro police initially said they were pursuing a criminal in a joint operation by civil, military and federal police officers when they shot João Pedro on May 18. There was no sign of illegal activity at the house in the Salgueiro complex of favelas, according to Eduardo Benones, a federal prosecutor investigating the operation.

João Pedro’s father, Neilton Pinto, was serving up fish at a bayside kiosk when he heard the choppers. By the time he reached the scene, police had already taken the teen’s body away, he said, sitting beside Rafaela for an interview just before the one-month anniversary of the incident.

Police never took João Pedro to a hospital and his family began a frantic search. Rafaela, 36, received a glimmer of hope when she saw on her phone that her son’s WhatsApp was active.

No response came from whomever was using João Pedro’s phone. But a campaign swept across social media and his body was tracked down the next day, inside a police forensic institute.