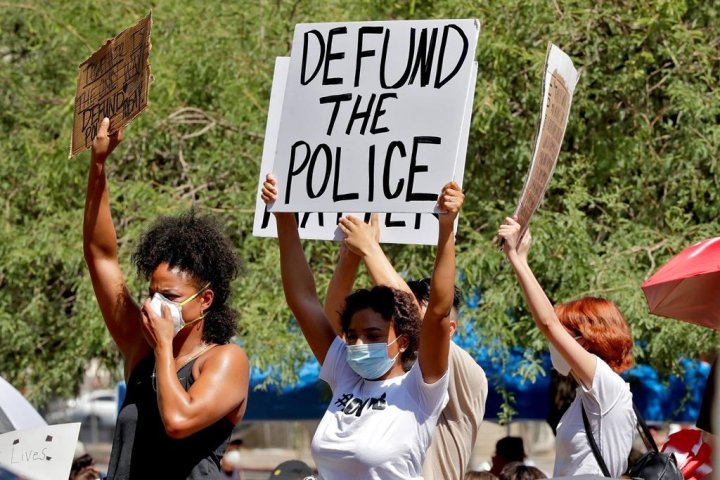 Ask two people what “defund the police” means, and you may get two different answers: the growing movement has called for everything from modest cuts to policing budgets to the abolishment of police forces altogether.

The most popular explanation, however, appears to be: reallocate some policing costs toward mental health, addiction treatment and social services while reframing the role of the police themselves — particularly in Black and Indigenous communities.

But experts are worried the issue has been muddled among the general public.

“I think it definitely becomes a political football and it misses the point,” said John Powell, a civil rights expert and director of the Othering and Belonging Institute at the University of California, Berkeley.

“The point is — and I think we have a high consensus on this who believe it — that police are out of control and we need to actually do something to make the police more accountable and to make them really be concerned with public safety for all people, not just white people.”

Yet confusion over what advocates are pushing for has persisted, which experts say is allowing critics to dismiss the movement without confronting how it could help with police reform.

That confusion needs to be solved and turned into meaningful policy, they say, which can only happen through difficult conversations.

“The most important thing lawmakers can do is listen, and listen honestly, to what these groups’ concerns are,” said Irwin Cohen, as associate professor of criminology and criminal justice at the University of the Fraser Valley.

“And then it’s incumbent on them to find solutions.”

Some Canadian politicians appear to have already made up their minds. Conservative Leader Andrew Scheer said he doesn’t believe the move “would make Canadians safer,” arguing the focus should be on stamping out systemic racism from within police forces.

Ontario Premier Doug Ford, when asked about defunding, said “I don’t believe in that for a second” and called for more training.

NDP Leader Jagmeet Singh has expressed support for redistributing police resources while calling for a “mixed approach” with other reforms. Prime Minister Justin Trudeau, for his part, said Canada “need(s) to explore the range” of “many different paths.”