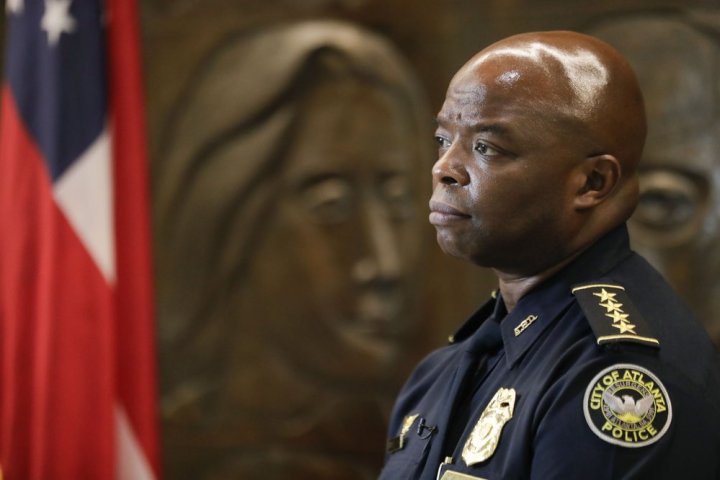 Atlanta police officers called out sick to protest the filing of murder charges against an officer who shot a man in the back, while the interim chief acknowledged members of the force feel abandoned amid protests demanding massive changes to policing.

Interim Chief Rodney Bryant told The Associated Press in an interview that the sick calls began Wednesday night and continued Thursday, but said the department had sufficient staff to protect the city. It’s not clear how many officers called out.

“Some are angry. Some are fearful. Some are confused on what we do in this space. Some may feel abandoned,” Bryant said of the officers. “But we are there to assure them that we will continue to move forward and get through this.”

Prosecutors brought felony murder and other charges against Garrett Rolfe, a white officer who shot Rayshard Brooks after the 27-year-old black man grabbed a Taser during a struggle and ran, firing it at the officer, Fulton County District Attorney Paul Howard said.

Four months before Brooks was killed, Reconnect, a company that focuses on fighting incarceration and addiction, interviewed him about the year he spent in jail. He said the criminal justice system treats the people incarcerated within like “animals.”

“Some of the system could, you know, looks at us as individuals,” Brooks said. “We do have lives, you know, we’re just a mistake we made.”

He said having a record hindered the formerly incarcerated from trying to “provide for ourselves as far as getting a job and getting ourselves back on track.”

Howard said Brooks was not a deadly threat at the time and that Rolfe kicked the wounded man and offered no medical treatment for over two minutes as Brooks lay dying. Another officer, Devin Brosnan, who the district attorney said stood on Brooks’ shoulder as he struggled for his life, was charged with aggravated assault and violation of his oath.

Rolfe and Brosnan both contend their actions were justified and turned themselves in Thursday. Jail records show Brosnan was released on a signature bond, meaning he only has to pay if he fails to show up for court, while Rolfe was being held without bond. Rolfe was fired and Brosnan placed on desk duty.

A few hours after reporting to the Fulton County jail in Atlanta, Rolfe was moved to the jail in neighbouring Gwinnett County, according to online records.

The decision to prosecute the officers came less than five days after the killing rocked a city — and a nation — still reeling after George Floyd’s death at the hands of police in Minneapolis set off nationwide protests that have urged an extensive rethink of policing and an examination of racism in the United States.

L. Chris Stewart, a lawyer for Tomika Miller, Brooks’ widow, told reporters the charging of the officers brought the family no joy.