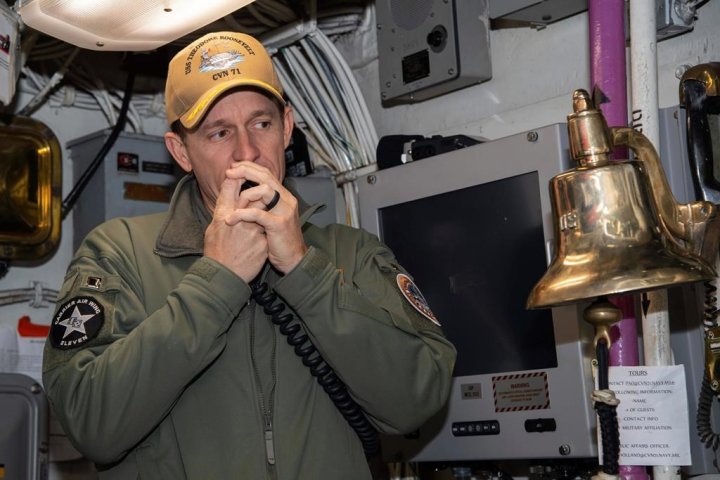 The two senior commanders on a coronavirus-stricken aircraft carrier didn’t “do enough, soon enough,” to stem the outbreak, the top U.S. Navy officer said Friday, a stunning reversal that upheld the firing of the ship’s captain who had pleaded for faster action to protect the crew.

Capt. Brett E. Crozier and Rear Adm. Stuart Baker, commander of the carrier strike group, made serious errors in judgment as they tried to work through an outbreak that sidelined the USS Theodore Roosevelt in Guam for 10 weeks, said Adm. Mike Gilday, the chief of naval operations. The Crozier decision was a surprise since Gilday had recommended that the captain be restored to his command less than two months ago after an initial inquiry.

The pandemic set off a dramatic series of events that led to Crozier’s dismissal, the abrupt resignation of the acting Navy secretary who fired him and the push for a broader review of the Pacific fleet’s top commanders and how they handled the virus outbreak.

The spread of COVID-19 aboard the carrier while on deployment in the Pacific in March exploded into one of the biggest military leadership crises of recent years. More than 1,000 crew members eventually became infected, and one sailor died, in what was the most extensive and concentrated spread of the virus across the U.S. military.

It eventually sent all of the 4,800 crew members ashore for weeks of quarantine, in a systematic progression that kept enough sailors on the ship to keep it secure and running. More broadly, it put out of commission a massive warship vital to the Navy’s mission of countering China’s power in the Asia-Pacific region.

Gilday said at a Pentagon news conference that Crozier and Baker “failed to tackle the problem head on and take charge,” as the virus spread throughout the ship, and their actions “fell well short of what we expect” of those in command. “They did not do enough, soon enough,” he said.

Gilday’s decision to hold both Crozier and Baker accountable is confirmation of concerns expressed by top Pentagon officials who demanded a deeper investigation when the Navy presented the results of a preliminary probe in April. Gilday’s recommendation that Crozier be reinstated as a result of that probe was never acted upon, because the broader investigation was launched.

“Had I known then what I know today, I would have relieved him” of command in April, Gilday said.

Navy Secretary Kenneth Braithwaite, who took office after the deeper probe was begun, said at the news conference that “emotions got in the way” of determining the full story of what happened aboard the Roosevelt, resulting in a too-narrow initial investigation. He said there had been “a rush to judgment,” but he did not say who he blamed for that.

Among other findings, as described by Gilday, the investigation determined that the likely source of the coronavirus infection was obtained during a port visit in Vietnam in March. He said investigators were unable to determine who among the crew was the first person to be infected.

The investigation, done by Adm. Robert Burke and endorsed Friday by Gilday, found that Crozier failed to stem the outbreak or properly communicate the escalating crisis to senior commanders. It also concludes that the ship’s slow response to the virus was not his fault alone, and that Baker also failed to take decisive actions to address the problem.