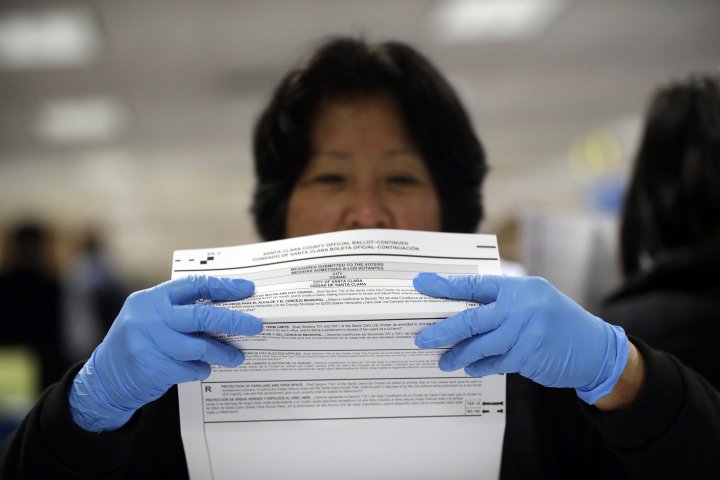 U.S. President Donald Trump on Friday said the growing use of mail-in ballots is the “biggest risk” to his reelection, and his chances may hinge on whether he can successfully block efforts to make voting by mail easier during the pandemic.

Trump’s comments were his first casting such high stakes for his multimillion-dollar legal campaign to fight mail-in voting. It comes as several battleground states are engaged in heated fights over plans for November’s general election, and courts are settling partisan disputes over how easy it should be to vote by mail.

“My biggest risk is that we don’t win lawsuits,” Trump said in an interview with Politico published Friday. “We have many lawsuits going all over. And if we don’t win those lawsuits, I think — I think it puts the election at risk.”

Health officials have said voting by mail can help prevent the spread of the coronavirus. But Trump has made clear he believes widespread mail-in voting would benefit Democrats. He has alleged — without citing evidence — that mail voting will lead to massive fraud, and the Republican National Committee has budgeted $20 million to fight Democratic lawsuits in at least 18 states aimed at expanding it.

To some degree, Trump’s effort appears to be pushing against the tide. Many states, including some with GOP leaders, are moving ahead with plans that ease access to mail-in ballots. Wisconsin, a state that swung to Trump in 2016, decided this week to send absentee ballot requests to nearly all voters before November’s elections, a step already taken by Michigan, another swing state.

You should also READ  At least 10 dead after shooting at popular shopping mall in Thailand: police

Primary elections have seen a surge in mail-in voting that suggests voters are comfortable casting ballots remotely. Many states already have easy access — requiring no excuses.

“The president and his supporters are actively fighting against vote by mail when that is somewhat of a moot point,” said Wendy Weiser of the Brennan Center for Justice. “In most of the country, voters are allowed to vote by mail and many chose to do so.”

Still, state legislatures and courts have plenty of details to fight about. The Democratic lawsuits typically seek a list of changes to state voting rules — such as allowing ballots to be collected by community groups, a practice often derided as ballot harvesting. They’re also seeking to ensure ballots postmarked as late as Election Day are counted.

Arizona on Friday settled a Democratic lawsuit by agreeing to make it easier for minorities and rural residents to cast ballots remotely. The state agreed to expand the number of ballot drop boxes in rural, Latino and tribal areas and engage in an education campaign in Spanish and tribal languages about the absentee process.

There are also four federal lawsuits pending in Wisconsin, a state that Trump won by fewer than 73,000 votes in 2016. The state’s bipartisan elections commission voted this week to send absentee ballot requests to 80 per cent of voters ahead of November, after a chaotic April election.

You should also READ  French serial killer expert admits his career is based on lies — and that he made up his wife
Source link
Tags: 2020 electionCoronavirusDonald Trumpelection fraudJoe Bidenmail in balletsPoliticsTrump reelectionU.S. electionWorld