George Floyd death: Use of police weaponry scrutinized after injuries at protests 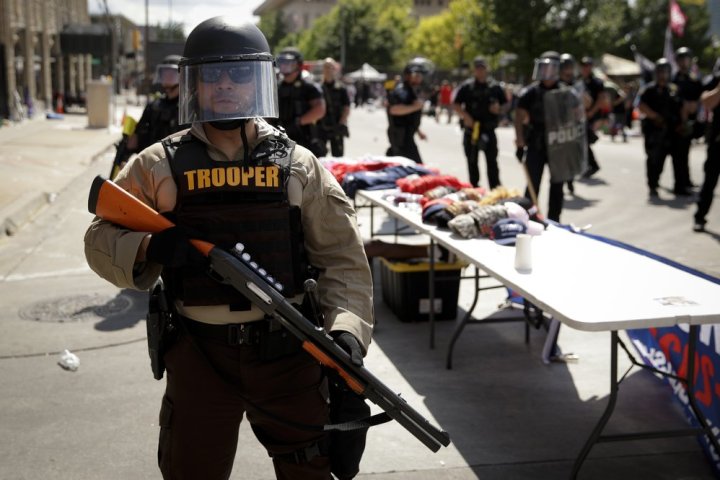 But the now-familiar scenes of U.S. police officers in riot gear clashing with protesters at Lafayette Park across from the White House and in other cities have police critics charging that the weaponry too often escalates tensions and hurts innocent people.

“When you see riot gear, it absolutely changes the mood,” said Ron Moten, a longtime community organizer in the nation’s capital who was out demonstrating this weekend. He said it takes away any perception the officers could be empathetic.

“If I went up to speak with a police officer and I’m covered in armor and holding a shield and a stick, don’t you think they would regard me as a threat?”

“When we see riot gear, as Black people it takes us back 400 years,” he said.

Protesters in Denver arrived at the hospital with injuries from police projectiles that caused one person to lose an eye and left three other people with permanent eye damage, said Prem Subramanian, a physician who operated on some victims following demonstrations late last month.

“They weren’t accused of any crime, and they came in with devastating eye injuries,” Subramanian said, adding that he was so upset about it that he complained to city officials, who promised to investigate any abuses. “We’re learning the consequences of using these weapons.”

He said the injuries rivaled what he saw treating shrapnel damage to eyes of soldiers at Walter Reed National Military Medical Center who were injured by explosives in Iraq and Afghanistan.

Rubber bullets and similar projectiles have damaged eyes or blinded at least 20 individuals from ages 16 to 59, according to the American Academy of Ophthalmology, since protests began over the death of George Floyd in Minneapolis.

Other tactics were on display at Lafayette Park, where police used chemical agents to break up a peaceful protest minutes before U.S. President Donald Trump posed for pictures outside a nearby church this month. In Buffalo, an officer used a baton to shove a 75-year-old man to the ground before that officer and others marched past as blood collected beneath the man’s head.

Amnesty International has questioned whether equipping officers “in a manner more appropriate for a battlefield may put them in the mindset that confrontation and conflict are inevitable.”

The growing use of less lethal weapons is “cause for grave concern” and may sometimes violate international law, said Agnes Callamard, director of Global Freedom of Expression at Columbia University and a U.N. adviser.