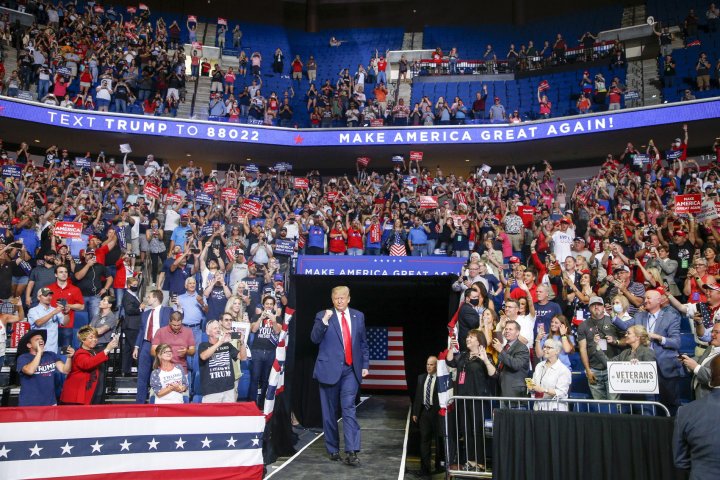 K-pop fans and teenage Tik Tok users are claiming responsibility for the low turnout at United States President Donald Trump’s campaign rally in Tulsa, Okla., on Saturday, in what some are calling the “best senior prank ever.”

The BOK Center in Oklahoma, where the event was held, can hold over 19,000 people in its arena, but video of the rally that surfaced online showed empty chairs lining the upper stadium seating areas, leaving most of the attendees sitting in the event centre’s lower bowl. Outdoor speaking events were also cancelled.

The rally was initially projected to be a raging success. Brad Parscale, chairman of the Trump re-election campaign, tweeted on Monday that the event drew more than one million ticket requests.

“President Trump is rallying in Tulsa with thousands of energetic supporters, a stark contrast to the sleepy campaign being run by Joe Biden from his basement in Delaware. Sadly, protesters interfered with supporters, even blocking access to the metal detectors, which prevented them from attending the rally,” he said in a statement to MSNBC.

“We are proud of the thousands who stuck it out.”

Tik Tok users and K-pop fans claimed to have deliberately sunk the rally, asking Americans register for the event and not show.

One user posted a video on Tik Tok captioned, “It would be a shame if people knew reserving seats at a trump rally were free,” with her face green-screened in front.

“Oh no I signed up for a Trump rally and I can’t go,” she said in the video. She then coughs twice — a reference to a scene in Mean Girls — and says, “I’m sick.”

Another uploaded a Tik Tok video dancing to the Macarena in front of her ticket reservation confirmations, to show proof that “those 2 seats will be empty.”

More followed, gaining hundreds of likes on the website and instructing their followers to do the same.