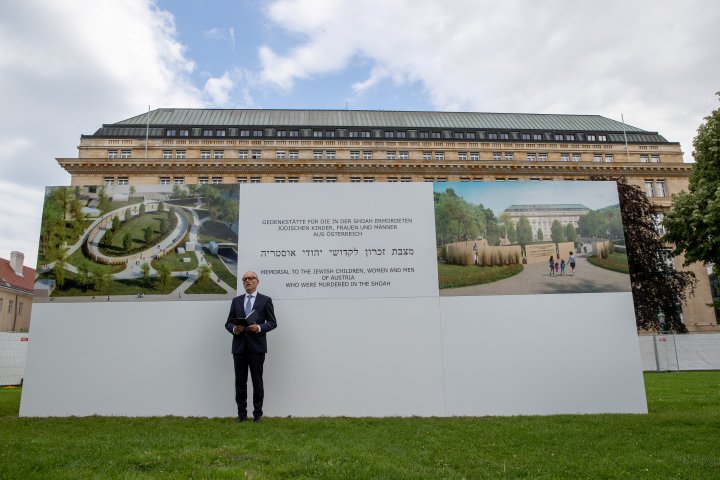 Austria broke ground Monday on a new memorial to the country’s 65,000 Jews killed during the Nazi era.

“The Memorial to the Jewish Children, Women and Men of Austria who were Murdered in the Shoah” being erected in Vienna’s central Ostarrichi Park will consist of large slabs set in the ground in a circle, engraved with the names of the 64,000 victims who have been identified. Another 1,000 are known to have been killed by the Nazis, but their names have been lost.

Nazi dictator Adolf Hitler was born in Austria, and many in the country enthusiastically welcomed Germany’s annexation of it in 1938, the year before World War II.

At that time, around 210,000 Jews lived in the country. Many fled, but later found themselves in Nazi hands again as the German armies swept westward to the English Channel and deep into the Soviet Union in the east.

The memorial, to be completed by next spring, is envisioned as a place of reflection, and both a tribute to those who lost their lives and a reminder of the perils of anti-Semitism.

There is only one entrance into the centre of the circle formed by the slabs, which will create a “place of reverence” for visitors, according to the plans.

“Descendants of those who were murdered should, without being disturbed, be able to search for the names of their relatives, to touch the letters with their hand, to say a prayer, to light a memorial candle,” organizers said on their website.

“For all Austrians, the memorial should offer a quiet place, in which they can remember the fate of their Jewish fellow citizens and honour their lives, today and in future generations.”

Austria’s parliamentary speaker, Wolfgang Sobotka, said at the ceremony that nothing could remedy the crimes of the Holocaust, but that the memorial could serve as a warning for the future.

“There is no gesture of redress here, but there is a gesture of remembrance,” he said, Austria’s APA news agency reported.