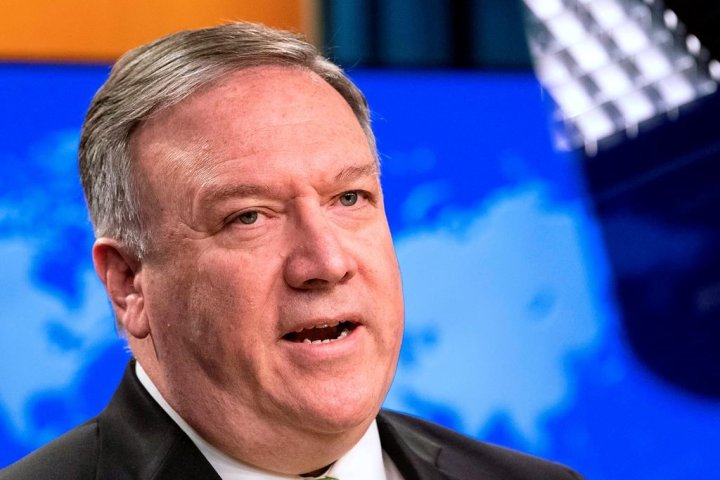 U.S. Secretary of State Mike Pompeo is calling on China to release two Canadian men that he says face “groundless” charges of spying.

Chinese authorities announced the charges against Michael Kovrig and Michael Spavor on Friday, after they had spent more than 550 days in prison without access to lawyers or family.

Pompeo says the U.S. is deeply concerned by China’s decision to formally charge Kovrig and Spavor.

“These charges are politically motivated and completely groundless. The United States stands with Canada in calling on Beijing for the immediate release of the two men and rejects the use of these unjustified detentions to coerce Canada,” Pompeo said in a statement on Monday.

“Additionally, we echo Canada’s call for immediate consular access to its two citizens, in accordance with the Vienna Convention on Consular Relations, as China has prohibited such access for almost six months, and the world has no knowledge of the two Canadians’ condition.”

Meng, the chief financial officer of Huawei Technologies, is living in luxury Vancouver home while her extradition hearing wends its way through a British Columbia court.

The United States wants to prosecute Meng for fraud, alleging she lied to banks in Hong Kong about her company’s connections with Iran, which could possibly violate U.S. sanctions.

A spokesman for China’s foreign ministry said Monday that his country does not arbitrarily detain people, and that Trudeau’s Friday remarks were “irresponsible.”

Last month, the B.C. Supreme Court judge ruled the allegations against Meng could constitute a crime in Canada. That meant Meng’s case remains before the court, unresolved.