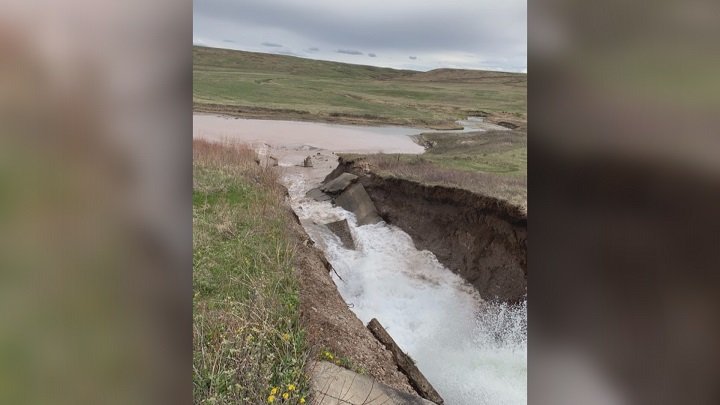 The provincial government is working to address water shortages some residents in Milk River, Alta. may be facing following an infrastructure failure on the St. Mary Canal in Montana.

On May 17, a concrete drop structure that funnels water from St. Mary’s River to neighbouring communities collapsed.

The structure is located in northern Montana and owned by the U.S. Bureau of Reclamation.

In a news release Monday, the Alberta government said permanent repairs will begin immediately and will be paid for by U.S. officials. The repairs are scheduled to be completed by September.

In the meantime, Alberta officials will be stepping in to help keep residents informed on water conservation and shortages in the area.

“Environment and Parks is supporting Alberta water users and working with our federal and U.S. counterparts to keep water users informed as work to repair the canal progresses.”

The St. Mary Canal was constructed more than a century ago and helps provide consistent water flow to the Milk River that many residents, farmers and animals rely on.

Officials noted that drinking and household water shouldn’t be impacted by this failure, however, recreational users and water licence holders will see a change in the coming months.

Officials said residents may need to explore water conservation opportunities for activities such as irrigation until the repair has been completed.

With a predicted low flow rate, officials also noted that water activities, including canoeing and kayaking, will most likely not be accessible this summer.

In light of the structure collapse, the province has provided Milk River with additional funding to increase water storage in the town. The town can currently support up to four months of water use should new water not be accessible from the river.

Taber-Warner MLA Grant Hunter said officials will also work to actively update residents on any developments or changes residents may see due to the U.S. structure failure.