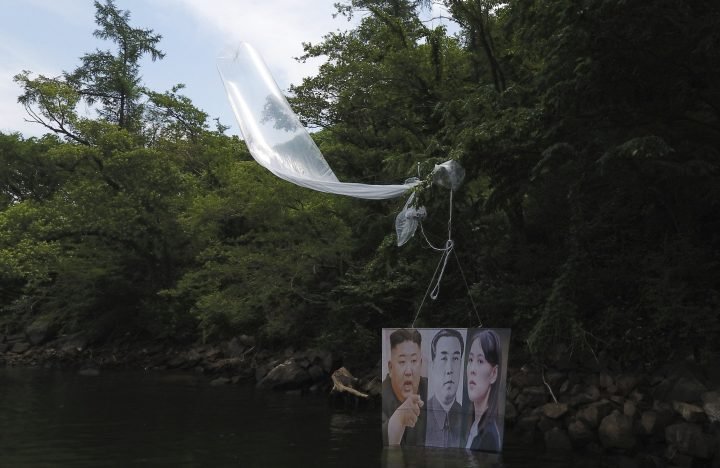 A South Korean activist said Tuesday hundreds of thousands of leaflets had been launched by balloon across the border with North Korea overnight, after the North repeatedly warned it would retaliate against such actions.

The move is certain to intensify tensions between the Koreas, after the North abruptly raised its rhetoric against South Korean civilian leafleting and pushed to resume its psychological warfare against the South.

Police in the South Korean border town of Paju said Tuesday they were checking into details about the reported leafleting.

Park, formerly a North Korean who fled to South Korea, said in a statement his leafleting is “a struggle for justice for the sake of liberation of” North Korean residents.

Calling North Korean leader Kim Jong Un “an evil” and his rule “barbarism,” Park said he’ll keep sending anti-Kim leaflets despite worries about his safety. “Though North Korean residents have become modern-day slaves with no basic rights, don’t they have the rights to know the truth?” he said.

South Korean officials have vowed to ban leafleting and said they would press charges against Park, who has sent leaflets toward North Korea for years.

Authorities said Park’s activities are unnecessarily raising animosities between the Koreas and potentially endangering residents in border areas. In 2014, North Korean troops opened fire at propaganda balloons flying toward their territory, triggering an exchange of fire that caused no known causalities.

Last week, North Korea blew up an inter-Korean liaison office on its territory and threatened to take unspecified steps to nullify 2018 agreements aimed at lowering front-line military tensions. On Monday, North Korea’s state media said it had manufactured 12 million propaganda leaflets to be floated toward South Korea in what it said would be the largest-ever anti-Seoul leafleting campaign.

Experts say North Korea is likely using the South Korean civilian leafleting as a chance to boost its internal unity and apply more pressures on Seoul and Washington amid stalled nuclear diplomacy.