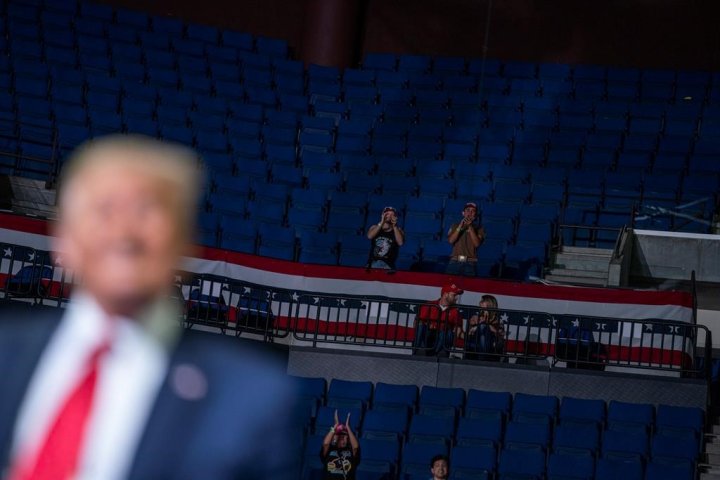 Only about a third of seats in the 19,000-seat BOK Center were filled for the rally, despite boasts by Trump and his campaign team that they had received more than 1 million ticket requests.

With all 50 states well into reopening their economies, Americans are now creating their own individual risk budgets and calculating what sort of activities are worth hazarding when coronavirus infections are still surging in some areas of the country.

At a moment when many Americans are still weighing the risks and rewards of mundane activities like a meal at a restaurant, a trip to the grocery store or a visit to the salon, the idea of attending a campaign rally — more than four months before Election Day — may seem like an extraneous, if not perilous, activity to some.

“There was the presumption that the risk calculus was being made very, very differently by Trump supporters and was broad enough to fill up that arena,” said Matt Bennett, executive vice president at the center-left Washington think-tank, the Third Way. “It just turns out it wasn’t.”

Trump and his campaign attributed the low attendance to worries about potential violence and media hype about the dangers of the virus. Left-leaning pranksters claimed they were behind many of the more than 1 million requests for tickets, giving Trump’s campaign the false sense that the event was going to have a massive overflow crowd.

But the relatively sparse crowd suggests that even in a rock-ribbed Republican state like Oklahoma, Americans of all political stripes still are cautious as they emerge from lockdown.

According to a June poll by The Associated Press-NORC Center for Public Affairs Research, Democrats are more likely than Republicans to say they’re very worried about themselves or someone in their family being infected with the virus.

But in total, about half of Republicans along with about 8 in 10 Democrats say they’re at least somewhat worried. And about 6 in 10 Americans still favor limiting gatherings to 10 people or fewer.

White House press secretary Kayleigh McEnany insisted Monday that the president was pleased with the energy of the crowd and stressed that more than 7 million viewers tuned into Fox News to watch. But privately, advisers to the president said he was furious about the low turnout.

The Trump campaign is now conducting a review of what went wrong in Tulsa. Presidential advisers privately expressed some regret at touting the numbers of ticket requests in advance but believed, more than anything, that Trump supporters were scared away by the potential for protests and violence in the area, according to three campaign and White House officials who spoke on condition of anonymity because they were not authorized to discuss private conversations publicly.