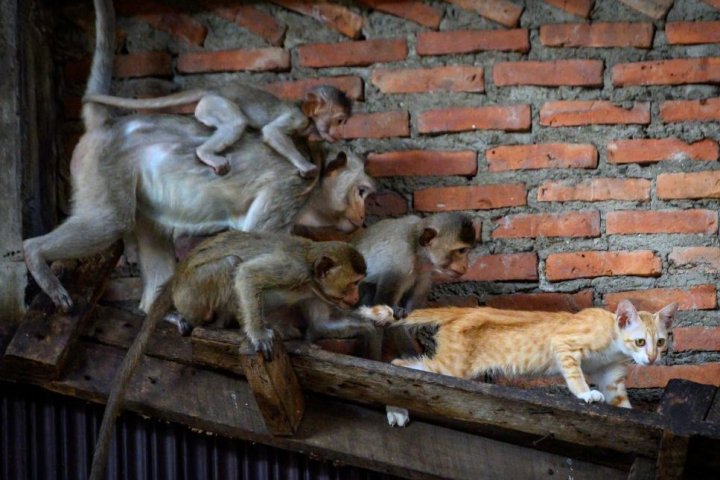 Lopburi locals have barricaded themselves inside against the macaques, and the city has designated several no-go zones that have been entirely taken over by warring factions of monkeys.

“We live in a cage but the monkeys live outside,” Lopburi resident Kuljira Taechawattanawanna told the AFP. She says she was forced to cover her terrace with netting to keep the hungry animals from raiding her home for food.

“Their excrement is everywhere (and) the smell is unbearable, especially when it rains,” she added.

Humans in the city had found a delicate balance with the thousands of macaques who lived there in pre-coronavirus times. The macaques attracted tourists to the city, and those tourists would buy bananas so they could feed the animals and take photos with them.

However, that delicate balance collapsed under the threat of the coronavirus, when lockdowns cut off the supply of tourists and left the hungry monkeys looking for a new food source. The world caught a glimpse of that struggle last March when video of a fight between rival monkey gangs went viral.

Things have only gotten worse since then, locals say. They’ve tried to keep the animals at bay by throwing them scraps and junk food, but that only made the monkeys more violent, officials say.

“The more they eat, the more energy they have … so they breed more,” Pramot Ketampai, a manager of several shrines in the city, told AFP.

“They’re so used to having tourists feed them and the city provides no space for them to fend for themselves,” Supakarn Kaewchot, a government veterinarian, told Reuters.

“With the tourists gone, they’ve been more aggressive, fighting humans for food to survive,” she added. “They’re invading buildings and forcing locals to flee their homes.”