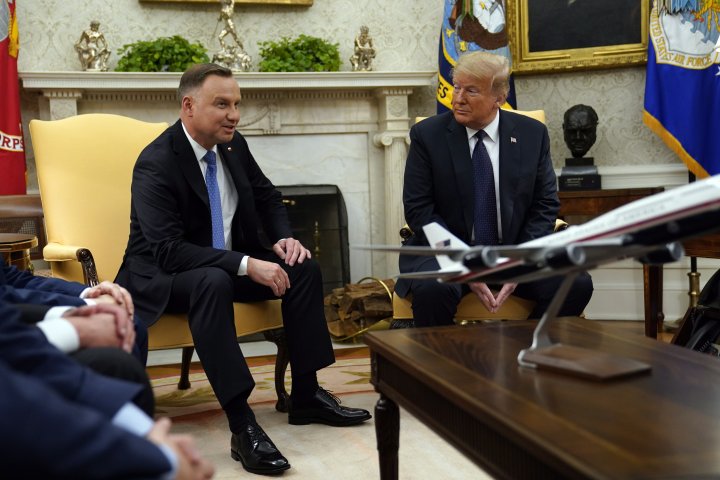 WASHINGTON — President Donald Trump welcomed Poland’s president to the White House on Wednesday, with a U.S. decision to send more American troops to Poland to bolster NATO’s eastern flank against Russian aggression at the top of the leaders’ agenda.

Even before Andrzej Duda arrived, the U.S. ambassador to Poland, Georgette Mosbacher, told TVN24 in Poland that the U.S. will send another 1,000 troops to Poland — over and above the 1,000 declared last year. But she said they might not necessarily be transferred from Germany, where Trump is planning to withdraw about 10,000 U.S. troops.

This is Duda’s third visit to Washington since Trump took office and the first visit by a head of state to the White House since the coronavirus pandemic shut things down. The U.S. and Polish delegations and members of the media were tested before the two leaders met in the Oval Office, although none of the officials wore masks.

Trump greeted Duda warmly and stressed that it was both his close personal relationship with the leader and the close ties between the two nations that led to Duda being the first foreign leader to visit since the pandemic began.

“We’ve never been closer to Poland than we are right now,” Trump said.

The two leaders also were to discuss energy security, including a natural gas pipeline Russia wants to transport more gas into Europe. U.S. sanctions have obstructed construction of the pipeline, causing rifts between the U.S. and its European allies that want the gas. Other topics being discussed include cybersecurity, telecommunications, 5G networks and economic co-operation.

Under an agreement announced last year, the U.S. already is planning to send about 1,000 more troops to Poland, and progress is being made, officials said, to lay the groundwork for those moves.

Lt. Col. Carla Gleason, a Pentagon spokeswoman, said it “is working options with U.S. European Command consistent with the president’s directive.” She said the department’s priorities include enhancing deterrence against Russia, which is a key part of any buildup in Poland. Based on the agreement with Poland, the U.S. will add a division headquarters, a combat training centre, a unmanned aircraft squadron and structure to support an Army brigade that could rotate in and out of the country.

The Defence Department is reviewing options to begin pulling the troops out of Germany, but even though some may be shifted to neighbouring Poland, the withdrawal will still present complex logistical challenges and will not happen fast. U.S. officials said no final decisions have been made on where the troops currently stationed in Germany will go.

Trump has said he is determined to cut the number of troops in Germany from about 35,000 to 25,000. Shifting forces out of the country has long been rumoured and is in line with Pentagon efforts to put more troops in the Indo-Pacific. But Trump’s comments last week suggested the move is tied more directly to his anger over Germany’s failure to meet NATO defence spending goals.

“Several thousand troops currently assigned to Germany may be reassigned to other countries in Europe,” Trump’s national security adviser, Robert O’Brien, said in an op-ed published Tuesday in The Wall Street Journal. “Thousands may expect to redeploy to the Indo-Pacific, where the U.S. maintains a military presence in Guam, Hawaii, Alaska and Japan, as well as deployments in locations like Australia.”

A number of Congress members have objected to Trump’s decision and some Republicans sent him a letter outlining their concerns. Pulling the troops out, said Rep. Michael McCaul, R-Texas, “may do more to harm the national security interests of the U.S. and our NATO allies and partners than it will to incentivize Germany to contribute more.”