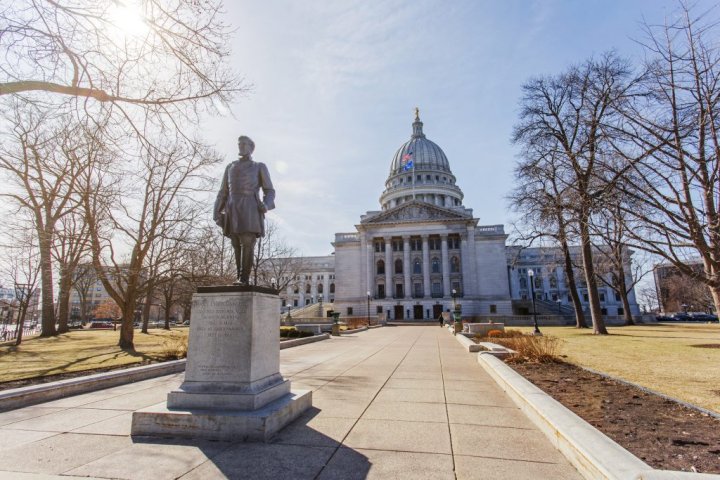 Crowds outside the Wisconsin State Capitol in Madison tore down two statues and attacked a state senator amid protests following the arrest of a Black man who shouted at restaurant customers through a megaphone while carrying a baseball bat.

Video released by the Madison Police Department shows the man talking through the megaphone Tuesday while walking around the restaurant’s outdoor patio. He goes inside and paces through the restaurant with the bat on his shoulder, saying he’s “disturbing” the restaurant and talking about God and the police before walking out.

As many as five officers can be seen taking the man to the sidewalk and carrying him to a police squad car after he initially resisted arrest.
The unrest followed weeks of mostly peaceful protests of the death of George Floyd, who died on May 25 in Minneapolis after a white police officer used his knee to pin down the handcuffed Black man’s neck even after Floyd stopped moving.

Statues of Wisconsin’s motto “Forward” and of Col. Hans Christian Heg were dragged away from the statehouse. The statue of Heg, an anti-slavery activist who fought and died for the Union during the U.S. Civil War, was decapitated and thrown into a Madison lake by protesters, the newspaper said.

Heg, who immigrated to the United States from Norway, became a newspaper editor and an outspoken member of the anti-slavery Free Soil Party. When the Civil War broke out, he was chosen to lead a regiment from Wisconsin.

He was killed leading his troops at the Battle of Chickamauga in 1863.

The destruction followed similar unrest nationwide following Floyd’s death, but in other cities statues of Confederate soldiers and other symbols of slavery were destroyed.

“I don’t know what happened … all I did was stop and take a picture … and the next thing I’m getting five-six punches, getting kicked in the head,” Carpenter told a reporter for the newspaper.

Protesters chanting for the release of the man who’d been arrested also broke glass at the Tommy Thompson Center and smashed windows and lights at the state Capitol. Early Wednesday, police in riot gear worked to clear a crowd of about 100 people that remained in the area.
The Republican leader of the state Assembly called the protesters who knocked down the statues “thugs.”

“This is absolutely despicable. I am saddened at the cowardice of Madison officials to deal with these thugs,” Assembly Speaker Robin Vos tweeted as the statues were being torn down.

Vos also questioned why Democratic Gov. Tony Evers hadn’t intervened in the destruction of the statues, given it took place on state Capitol property.