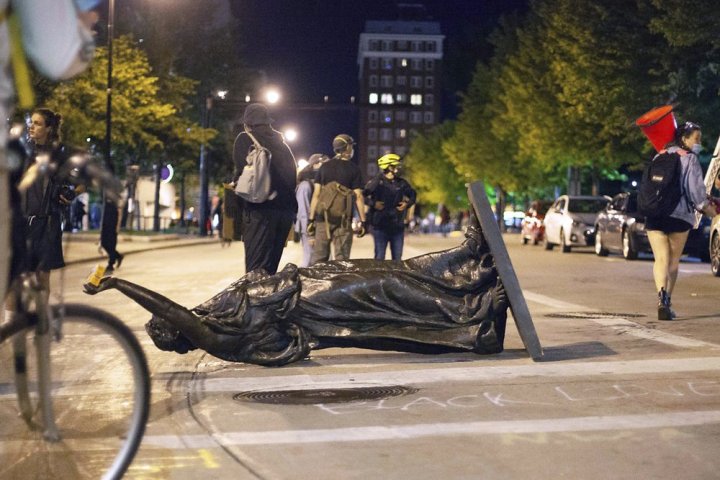 Wisconsin’s governor activated the National Guard on Wednesday to protect state properties after a night of violence that included the toppling of two statues outside the state Capitol, one of which commemorated an abolitionist Civil War hero.

Protesters also attacked a state senator, threw a Molotov cocktail into a government building and attempted to break into the Capitol Tuesday night, only to be repelled by pepper spray from police stationed inside. The violence broke out as a group of 200 to 300 people protested the arrest of a Black man who shouted at restaurant customers through a megaphone while carrying a baseball bat.

About 40 people who gathered Wednesday night outside the downtown county jail where the man was being held were peaceful as of 10 p.m., calling for his release.

Gov. Tony Evers, who toured the damage from Tuesday night and said the violence was in “stark contrast” to earlier peaceful protests, said he was activating the National Guard “to make sure people can exercise their First Amendment rights while ensuring the safety of members of the public and state buildings and infrastructure.”

“If your goal was to advance social justice and policing reforms in the state of Wisconsin and making sure systemic racism is a thing of the past, you failed,” Evers said of the protesters on WTMJ-AM.

Republican state lawmakers and others faulted Evers and Madison’s Democratic mayor for not moving more quickly on Tuesday to quell the violence.

“The mob has become very bold,” said Madison Alderman Paul Skidmore. “They see they can get away with a little, and they inch forward more and more. (Downtown Madison) is a battle zone right now, and I fear for my city.”

The violence unfolded in a city long known as a liberal bastion with a long history of protest, dating back to student demonstrations on the University of Wisconsin campus in the 1960s. About 100,000 people protested in 2011 over then-Gov. Scott Walker’s anti-union proposals.

It also exposed simmering anger over the 2015 shooting by police of a 19-year-old Black man by an officer who remains on the force. That shooting has been referenced by protesters in recent weeks.

The violence started Tuesday after Madison police arrested a protester who came to a restaurant across the street from the Capitol with a bat on his shoulder. Video released by Madison police shows the man, Devenore Johnson, talking through a megaphone while walking around the restaurant’s outdoor patio and inside, saying he’s “disturbing” the restaurant and talking about God and the police before walking out.

On another video released by police, as many as five officers can be seen taking Johnson to the sidewalk and carrying him to a police squad car after he resisted arrest.

Police said on Tuesday night a group of 200 to 300 people broke windows in multiple buildings, threw a Molotov cocktail into the city-county building, brought down the statues on the Capitol grounds, broke glass at a state office building and smashed windows and lights at the Capitol.