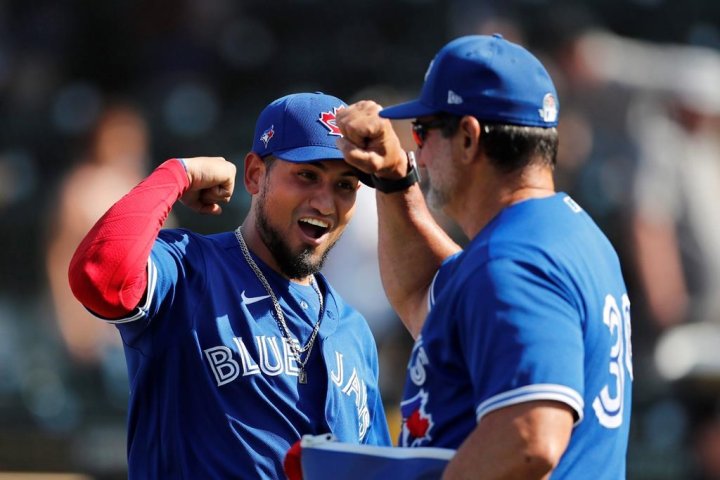 John Axford loses track when trying to recall the number of people he would come into contact with in a typical day as a Major League Baseball player.

There’s the doorman he sees as he leaves his hotel, the restaurant staff that serves him lunch, the taxi driver that takes him to the stadium and the security guards who greet him when he gets there — and that’s all before he steps foot into a clubhouse full of players, coaches, trainers and staff.

Axford, a former Toronto Blue Jays pitcher from Port Dover, Ont., said he wasn’t surprised to hear of MLB’s plan to return with a 60-game regular season. But even if the league tries to reduce the number of interactions between its players and the outside world, Axford’s not convinced a season can safely begin during a pandemic.

“Your interactions (with other people) are quite numerous within a day, there are a lot of people involved,” Axford said from his Burlington, Ont., home.

“It would be great if something could happen here and baseball could come back — but not at the expense of public health.”

MLB announced its return plan Tuesday in a statement that called the health and safety of its players and employees its “foremost priorities.”

Players would report to training camps July 1 with the season starting July 23 or 24.

Unlike the NHL and NBA, which are planning games in either one large complex or in hub cities, MLB will play in home stadiums and travel for road games against division rivals and teams in other cities within relative proximity. There will be no fans in attendance.

Toronto, the lone MLB team north of the currently closed Canada-U.S. border, is still hashing out details for its training site and home games. The Blue Jays have asked the Canadian government for permission to use Rogers Centre and are awaiting a decision.

But before they can start training, they need to get healthy. That goes for all teams.

High-profile athletes have been testing positive for COVID-19 at an alarming rate this week. News trickled in within an hour of MLB’s announcement that Charlie Blackmon, a four-time Colorado Rockies all-star, had tested positive along with two of his teammates. There was word the following afternoon that several players and staff of the Blue Jays were infected.