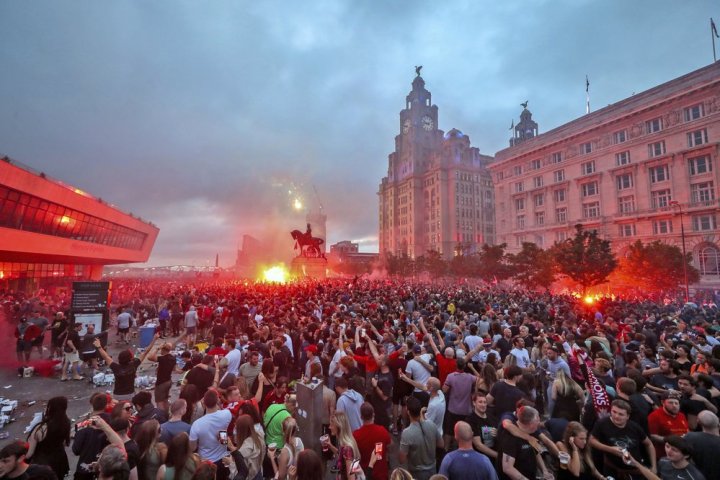 Police in the English city of Liverpool have been given more powers to break up crowds after celebrations to mark Liverpool Football Club’s first league title in 30 years led to disorder.

The local move to stop gatherings of more than two people came after the sheer joy of victory, together with warm weather, prompted people to cast off worries about the COVID-19 pandemic and to gather in huge crowds.

Amid the wild celebrations, part of the Liver Building — a local landmark — caught fire. Images circulating on social media appear to show a firework sailing from the crowd and striking the building’s balcony before exploding. Four fire engines were dispatched and the blaze was put out, but the extent of the damage is unclear.

The gatherings come amid increasing worries about the unwillingness of the public to follow social distancing rules meant to halt the spread of COVID-19. Exasperated Liverpool Mayor Joe Anderson said on Twitter that he was “really concerned” about the images he was seeing.

“I appreciate #LFC fans want to celebrate but please, for your own safety, and that of others, go home and celebrate at home,” he said. “Covid-19 is still a major risk and our city has already lost far too many people to the illness.”

Under lockdown restrictions in England, groups are limited to six people.

Huge gatherings were also reported in London overnight for the third night in a row. Met Police commander Bas Javid told the BBC that the police have been trying to persuade people to go home rather than to arrest them.

“We’re not going to arrest our way out of situations like this, but what I can be clear about is if these situations do descend into chaos and violence and disorder, which is completely unacceptable, we will take a much more thorough and a robust position,” he warned. “It’s the communities that are very, very upset by this, as much as the police are.”