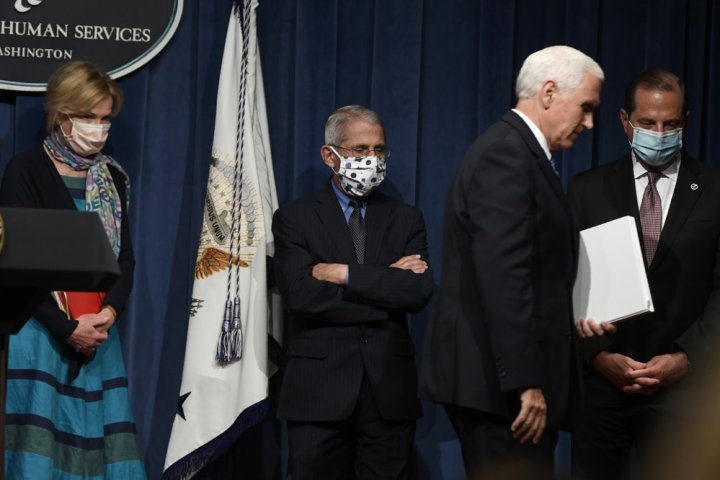 Forgive the American people if they’re in a fog about face masks. U.S. President Donald Trump and the federal government have done a number on them.

First there was the don’t-do-it phase. Then the nice-but-not-for-me dissonance. Followed by the local-rules-don’t-apply exceptions. Topped off by Trump’s stated suspicion that some people wear masks just to troll him.

It has all added up to a murky message about one of the critical tools in the fight against the coronavirus pandemic. And the politicization of the to-wear-or-not-to-wear debate is clear in recent public polling.

To be clear: The Centers for Disease Control and Prevention recommends that people wear cloth face coverings in public settings where other social distancing measures are difficult to maintain. Some states and local communities require them.

But the messaging disconnect from Washington was evident as recently as Friday, when Vice-President Mike Pence defended Trump’s decision to stage two big mask-scarce gatherings in the past week in states with big surges in infections and, in one case, local rules requiring masks.

Early on, the government’s no-mask message was unequivocal. As the first known COVID-19 infections were identified on U.S. soil, top public health officials insisted masks should be reserved for front-line workers.

Later, the CDC issued its recommendation for cloth face coverings in public settings where other social distancing measures were difficult to maintain. But Trump immediately undercut that guidance by flatly stating that he wouldn’t be following it.

He told The Wall Street Journal this month that some people wear masks simply to show that they disapprove of him.

Now, the mask debate is heating up in the South and West, where infections are surging to levels the country hasn’t seen since April, when the Northeast and Midwest were particularly hard-hit.

In Arizona, Florida, and Texas, with GOP governors and huge spikes in infections, there’s been a hesitance to require people to wear masks in public spaces.

But in California, Nevada and North Carolina,- with Democratic governors and increasing infection levels, rules requiring masks took effect this past week.