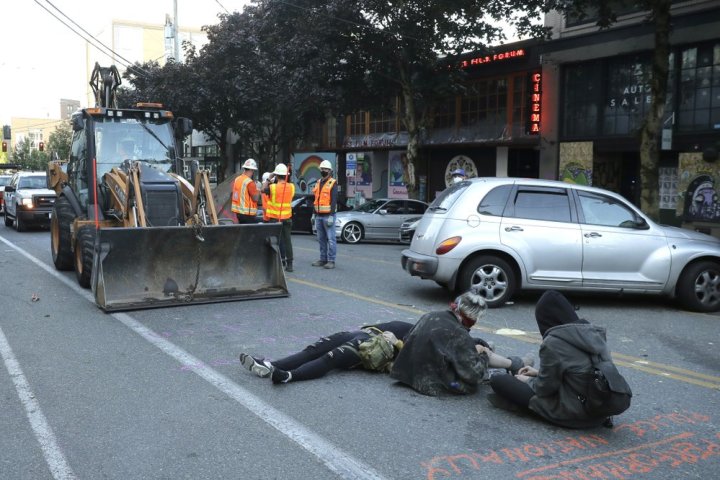 Seattle Mayor Jenny Durkan met with demonstrators Friday after some lay in the street or sat on barricades to thwart the city’s effort to dismantle an “occupied” protest zone that has drawn scorn from President Donald Trump and a lawsuit from nearby businesses.

Crews arrived with heavy equipment early Friday morning at the Capitol Hill Occupied Protest, an occupied protest zone in Seattle, ready to dismantle barriers set up after protesters seized the area June 8 following clashes with police. But by mid-morning, they appeared to have backed off rather than risk conflict.

Omari Salisbury, a local journalist who attended the afternoon meeting between protesters and the mayor, told reporters afterward that the mayor had agreed to wait until Sunday morning to remove most of the barricades. The mayor’s office did not immediately respond to an email seeking to confirm that report.

The collective of protesters, activists, educators and volunteers in the CHOP was formed after clashes with police who tear-gassed people protesting the police killing of George Floyd in Minneapolis.

Durkan has expressed support for the protest, calling it “a peaceful expression of our community’s collective grief and their desire to build a better world.”

But following several shootings in the area, Durkan earlier this week said the city would wind down the protest zone, at first by encouraging demonstrators to leave. In addition, she said police would return to a nearby precinct that was abandoned following clashes with demonstrators.

Nearby businesses and property owners filed a federal lawsuit against the city on Wednesday for its tolerance of the zone, saying officials had been complicit in depriving them of their rights to their property.

The businesses said they did not intend to undermine the anti-police-brutality or Black Lives Matter messaging of the protest. But they said they had limited access to their businesses, and sometimes have been threatened for photographing protesters in public areas or for cleaning graffiti off their storefronts.

The work crews intended to remove the barricades, not the remaining protesters, on Friday. Sam Zimbabwe, city transportation director, told Salisbury, who has been live-streaming the protest.

Workers were preserving artwork that had been painted on the wooden barricades, Zimbabwe said, adding that the department would work to return it to the people who created it.

“We’re not trying to have conflict,” he said.

A number of protesters remained camped in tents outside the East Precinct; Durkan said barricades protecting them from traffic would remain even after the other barriers are removed Sunday, according to Salisbury. The city has not given a timeline for officers’ return to the building except to say it would be in the near future.