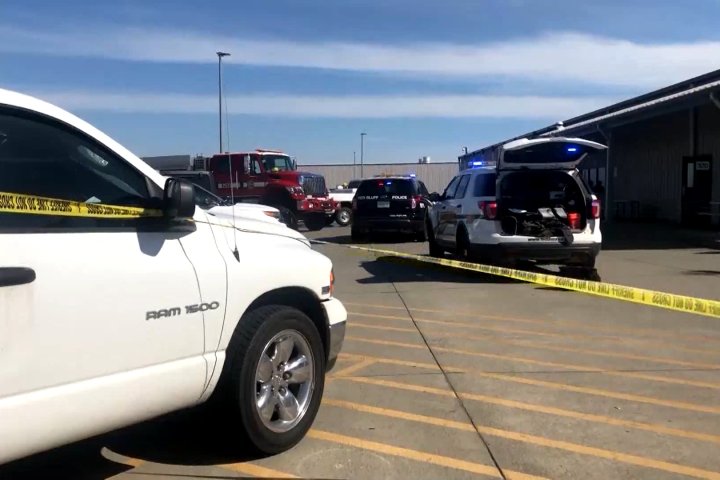 RED BLUFF, Calif. — Two people were left dead and at least four people were in fair condition at a hospital Saturday after a man drove into a distribution centre and started shooting at people.

The two deceased people and the four injured ones were treated at St. Elizabeth Community Hospital in Red Bluff, spokeswoman Allison Hendrickson told The Associated Press. She declined to provide more details.

A Red Bluff Police Department statement says officers were called for an active shooter at the Walmart distribution centre around 3:30 p.m.

“After arriving, a male adult shot at one or more of the officers multiple times,” the statement said.

“One Red Bluff Police Officer and one Sergeant used their duty rifles and shot at the suspect, ultimately stopping the threat.”

The police statement says no officers were injured and the suspect’s condition is “unknown” at this time.

The suspect had been shot in the chest by about 3:45 p.m., according to dispatchers cited in the newspaper.

Scott Thammakhanty, an employee at the facility’s receiving centre, told the Record-Searchlight he heard the shooter fire from a semi-automatic weapon.

“It went on and on — I don’t even know how many times he fired,” Thammakhanty said. “I just know it was a lot.”

You should also READ  Co-operation on trade paved the way for deal on Canada-U.S. border closure: ambassador

Thammakhanty and others started running for their lives, and he saw people lying on the ground as he went, he said.

Thammakhanty told the newspaper that he didn’t know his identity.

Coronavirus cases have hit 10 million worldwide. Where do we go from here?