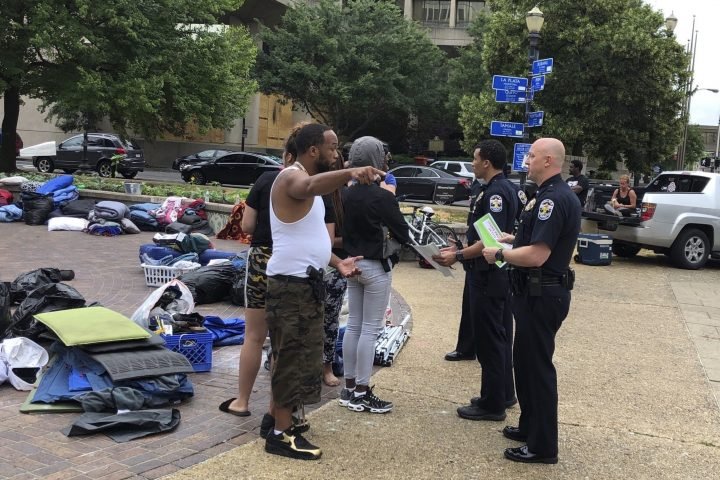 Police in Kentucky on Sunday identified a man who was fatally shot amid a protest over the killing of Breonna Taylor.

Reports of shots fired at Jefferson Square Park in downtown Louisville came in around 9 p.m., Louisville Metro police said in a statement. A second shooting victim was found across the street. That person was hospitalized with injuries that were not life-threatening.

Video posted on social media appeared to show a man opening fire into the park as people scrambled for cover. The footage later showed at least one person bleeding profusely on the ground.

Officers cleared the park and police “are trying to gather as much information as possible in order to identify all who were involved in the incident,” the police statement said. No information about arrests, possible suspects and the identify and age of the second victim was immediately released.

Several dozen people gathered Sunday at the park. A few Louisville police officers arrived to hand out flyers that said overnight camping and cooking at the site is banned, but protesters will be allowed to continue gathering during the day. Police removed tents from the site and told protesters they could pick them up at a separate location.

John Kriner knelt for nearly 30 minutes at the site, Jefferson Square near the city’s courthouse, to pray for peace.

You should also READ  Missing the Stonehenge summer solstice? Watch virtually for the 1st time this year

Kriner said it was his first visit to the protest site.

“I just want there to be peace and calm,” Kriner said. .

The park has for weeks been the epicenter for protests in the city after the police killings of Taylor and George Floyd. The Saturday night shooting was at least the second during nearly a month of protests in Louisville over Taylor’s death. Seven people were wounded May 28 when gunfire erupted near City Hall, prompting a statement from Taylor’s mother asking people to demand justice “without hurting each other.”

Taylor, a 26-year-old Black woman, was killed in her Louisville home in March by police who were serving a no-knock warrant. Protesters have been calling for the officers involved in her death to be charged. One of the officers was recently fired.

Kenneth Walker, Taylor’s boyfriend, was originally charged with attempted murder after he fired a shot at one of the officers who came into the home. Walker has said he thought he was defending from an intruder.