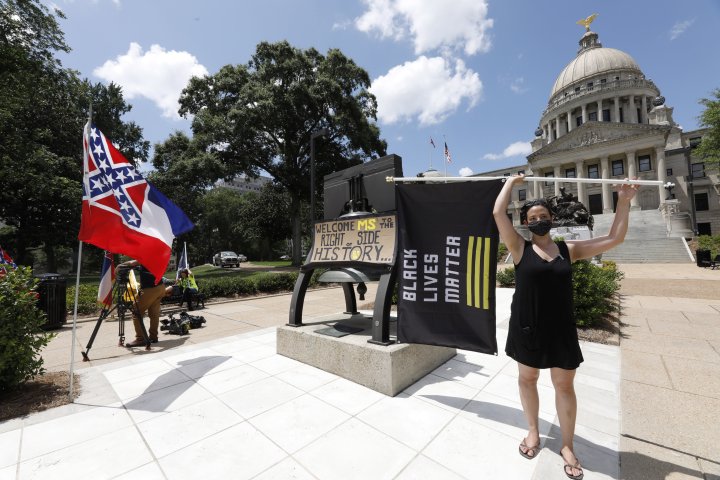 JACKSON, Miss.  — Mississippi lawmakers voted Sunday to surrender the Confederate battle emblem from the state flag more than a century after white supremacist legislators adopted the design a generation after the South lost the Civil War.

Spectators in the Capitol cheered and applauded after the votes in the House and Senate.

Each chamber had broad bipartisan support for the historic decision. Republican Gov. Tate Reeves has said he will sign the bill, and the state flag will lose its official status as soon as he does. That could happen in the next few days.

Mississippi has faced mounting pressure to change its flag during the past month amid international protests against racial injustice in the United States.

After the vote, legislators embraced each other. Even those on the opposite side of the issue also hugged as an emotional day of debate drew to a close.

A commission is to design a new flag that cannot include the Confederate symbol and that must have the words “In God We Trust.” Voters will be asked to approve the new design in the Nov. 3 election. If they reject it, the commission will set a different design using the same guidelines, and that would be sent to voters later.

Mississippi has a 38 per cent Black population — and the last state flag that incorporates the emblem that’s widely seen as racist.

Republican House Speaker Philip Gunn, who is white, has pushed for five years to change the flag, saying that the Confederate symbol is offensive. The House passed the bill 91-23 Sunday afternoon. Within hours, the Senate followed suit, 37-14.

“How sweet it is to celebrate this on the Lord’s day,” Gunn said. “Many prayed to Him to bring us to this day. He has answered.”

Debate over changing the flag has arisen before, and in recent years an increasing number of cities and all the state’s public universities have taken it down on their own. But the issue has never garnered enough support in the conservative Republican-dominated Legislature or with recent governors.

That dynamic shifted in a matter of weeks as an extraordinary and diverse coalition of political, business, religious groups and sports leaders pushed to change the flag.