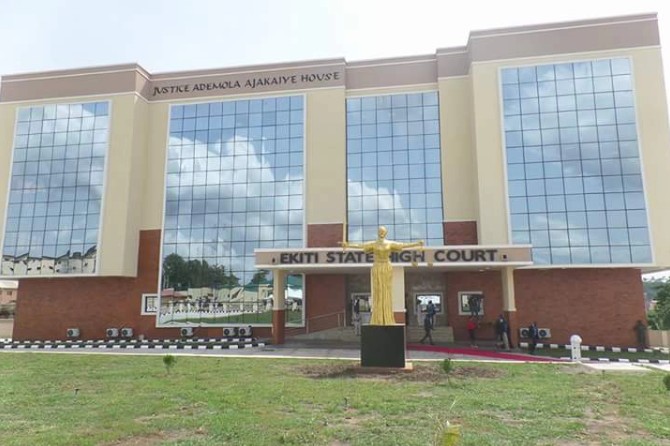 An Ado-Ekiti High Court has given a legal backing to the restoration of the the rights of two ruling houses the royal stool of Olosi of Osi-Ekiti, in Ekiti State.

Justice Adekunle Adeleye in his judgement in a case that for five years in court validated of legal tussle an Ekiti State High Court, sitting in Ado-Ekiti, has validated the 2015 restoration by Ekiti State Government, the 1957 Declaration on the Olosi of Osi-Ekiti.

Justice Adeleye held that with the judgment the rights of Arubiojo and Onifishin ruling houses to the Olosi Stool have been restored.

The court also resolved all the six issues in the case against the applicants and in favour of the respondents.

While delivering judgement on an Application for Certiorari Motion no. HID/14m/15 filed by the Akombo and Alawe Ruling Houses seeking to quash the decision of the state government to restore the rights of Arubiojo and Onifishin ruling houses to the Stool of Olosi of Osi-Ekiti.

The applicants in the case are Princes Emmanuel Farotimi, Williams Ojo and Adewole Adeyeri, for themselves and on behalf of AKOMBO and ALAWE ruling houses of Osi-Ekiti.

The Respondents are the  Commissioner for Local Government, Community Development and Chieftaincy Affairs, Ekiti state, Attorney General and Commissioner for Justice, Ekiti state, Ekiti State Government, Prince (Bishop) Peter Ademakinwa and Prince Adebayo Ajayi, for themselves and on behalf of ARUBIOJO ruling house of Osi-Ekiti and Prince Femi Robinson, for himself and on behalf of ONIFISHIN ruling house of Osi-Ekiti.

On whether the applicants have cause of action, the court held that there was no wrongful action on the part of the Ekiti state government and that the action of restoring the rights of the Arubiojo and Onifishin ruling houses did not injure the applicants.

The court also held that the applicants violated Order 40 Rule 9 (2) of the Civil Procedure Rules of the Ekiti State High Court by not bringing the proceedings of the sitting of the Ekiti State Executive Council they complained of before the court and also failing to give reasons on why they failed to do so.

The court further held that having participated in the only sitting of the Chieftaincy Committee of the Ekiti State Council of Traditional Rulers, the applicants’ right to fair hearing was not breached.

The court also held that in the circumstances of the case, the applicants’ application for Certiorari failed as Certiorari can not lie against the executive action of the the Ekiti state government but only against lower tribunals and bodies exercising judicial or quasi-judicial powers.

The court therefore dismissed the applicants’ application and affirmed all the prayers of the respondents.

Reacting to the judgement, Counsel to the applicants, Dr. Oluropo Filani, said he is awaiting further directives from his clients to know the next step in the case.

Meanwhile, Barrister Julius Ajibare, Director of Public Prosecution (DPP), who appeared for the 1st to 3rd respondents and Barr. Adetunji Oso and Barr. Stephen Alabi, who represented the 4th to 6th respondents, lauded the judgement.