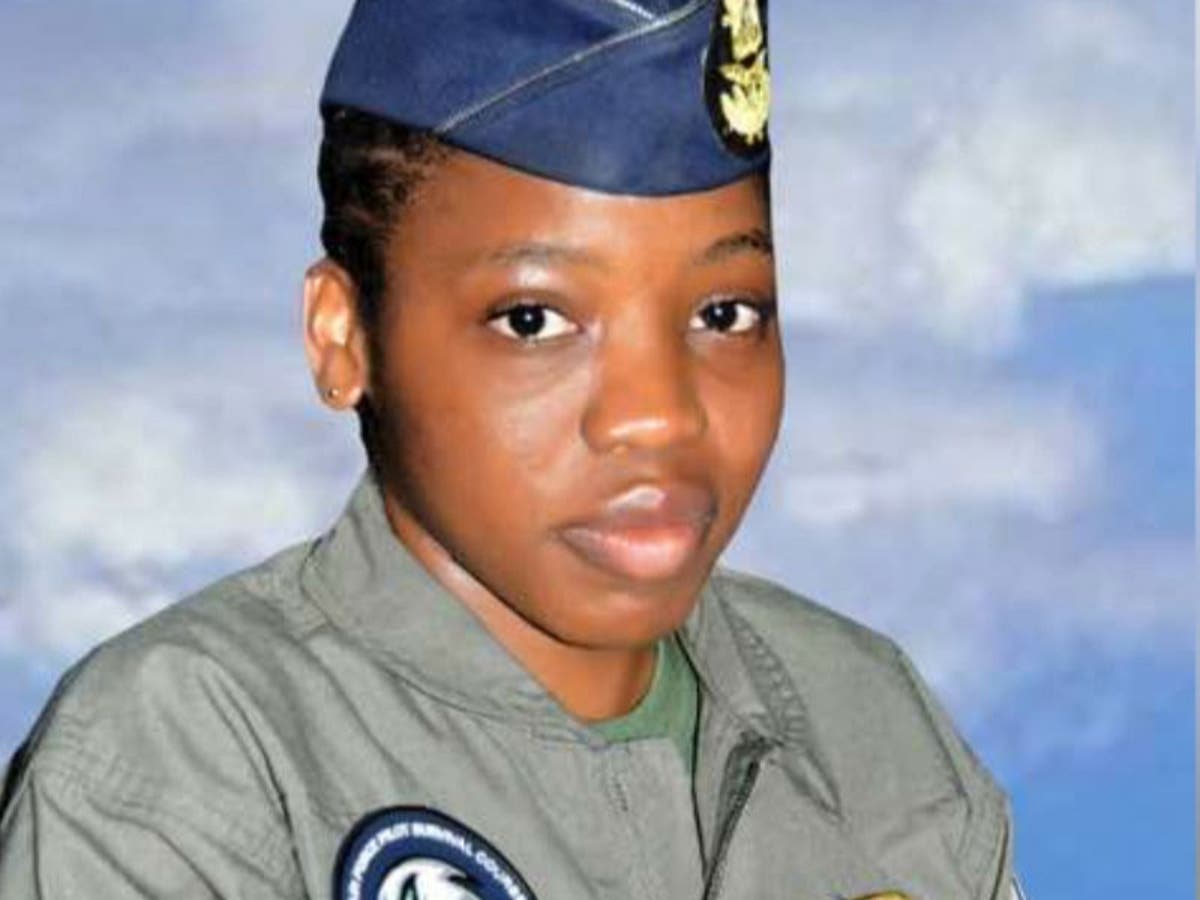 The Nigerian Air Force(NAF) on Sunday released its preliminary report on the death of Flying Officer Tolulope Arotile, the Service first female combat helicopter pilot who died of a car accident on July 14, 2020, laying to rest all conspiracy theories that have been in the social media concerning her death.

In a press release signed by  NAF Director of Public Relations, and Information, Air Commodore Ibikunle Daramola, the Force stated that the late flying officer was killed in an unfortunate accident that involved her classmates at the Air Force Secondary School who saw her and wanted to greet her.

Below is the full details of the NAF preliminary investigations:

1. On 14 July 2020, the Nigerian Air Force (NAF), and indeed the entire Nation, was thrown into mourning as a result of the death of one of our shining young stars in the person of Flying Officer Tolulope Arotile, the NAF’s first female combat helicopter pilot. Her unfortunate demise has elicited an overwhelming outpouring of condolences, prayers and support to the NAF as well as the Arotile Family. This has no doubt been so, not just for Tolulope’s outstanding accomplishments at the tender age of 24, but also because of her sterling personal qualities of excellence, hard work, dedication to duty, confidence and courage, which endeared her to her superiors, subordinates and peers in the Service. Unfortunately, because of the peculiar circumstances of the incident that led to her death, a rash of falsehoods, innuendos, conspiracy theories and the likes have been propagated in the public space, especially on Social Media. The NAF sincerely hopes that the findings of the just-concluded preliminary investigation into this unfortunate and painful incident will address the misinformed issues raised in the Social Media on the tragedy.

2. Moreover, while it would have been ideal for the entire investigation to be concluded before details on the incident are released, the NAF, in sensitivity to public concerns occasioned by the spread of false information, appreciates the imperative to provide more clarity at this very difficult moment. Please note that the details being revealed today have already been communicated to the Arotile Family, who ideally should be allowed to mourn their daughter and sister in peace, but for the unfortunate nature of the sad occurrence.

You should also READ  President Buhari expresses concern over Libya

3. In line with the normal procedure in the Nigerian Air Force during such occurrences, an investigation was immediately instituted to formally determine the circumstances of the incident. Accordingly, the preliminary investigation has revealed the following details:

a. The Late Flying Officer Tolulope Arotile, a Squadron Pilot at the 405 Helicopter Combat Training Group (405 HCTG) Enugu, attached to the Air Component of Operation GAMA AIKI in Minna, having recently completed her Promotion Examinations, was in Kaduna awaiting deployment for her next assignment. During this period, she stayed with her sister, Mrs Damilola Adegboye, at Sabo Area in Kaduna, visiting the NAF Base whenever necessary.

b. On 14 July 2020 at about 10.55am, Late Flying Officer Arotile received a phone call from her colleague, Flying Officer Perry Karimo, a fellow helicopter pilot from the 405 HCTG, who wanted to discuss arrangements for their return to Enugu, requesting that she comes to the Base so that they could work out the modalities. Subsequently, at about 10.58am, the Late Arotile placed a call through to Squadron Leader Diepiriye Batubo, the Group Operations Officer (GOO) of 405 HCTG, who was in Minna at the time, to clarify issues regarding her deployment. It must be highlighted that the call FROM Flying Officer Karimo as well as the one TO the Squadron Leader Batubo both took place before 11.00am, over 5 hours before the incident which led to her death.

c. Flying Officer Arotile was later conveyed from Sabo to the NAF Base Kaduna by her sister, Mrs Adegboye, where the Deceased dropped her phone for charging at a house in the Instructor Pilots’ Quarters belonging to Squadron Leader Alfa Ekele. Her elder sister later dropped her off at the Base Mammy Market at about 4.00pm, where she proceeded to photocopy and laminate some documents. It was while she was returning from the Mammy Market at about 4.30pm that 3 of her former schoolmates at the Air Force Secondary School (now Air Force Comprehensive School) Kaduna; Mr Nehemiah Adejoh, Mr Igbekele Folorunsho and Mr Festus Gbayegun, drove past her in a Kia Sorento SUV, with Registration Number AZ 478 MKA. It is noteworthy that Messrs Adejoh, Folorunsho and Gbayegun are all civilians who live outside NAF Base Kaduna, but were on their way to visit one Mrs Chioma Ugwu, wife of Squadron Leader Chukwuemeka Ugwu, who lives at Ekagbo Quarters on the Base.

d. Upon recognising their schoolmate, Arotile, after passing her, Mr Adejoh, who was driving, reversed the vehicle, ostensibly in an attempt to quickly meet up with the Deceased, who was walking in the opposite direction. In the process, the vehicle struck Flying Officer Arotile from the rear, knocking her down with significant force and causing her to hit her head on the pavement. The vehicle then ran over parts of her body as it veered off the road beyond the kerb and onto the pavement, causing her further injuries.

e. Flying Officer Arotile was subsequently rushed to the 461 NAF Hospital Kaduna for treatment, while Mr Folorunsho (one of the occupants of the vehicle) who is also an Accident & Emergency Nurse at the St Gerard Catholic Hospital Kaduna, administered First Aid.

f. Flying Officer Arotile was confirmed dead by the On-Call Doctor at the 461 NAF Hospital at about 4.45pm on 14 July 2020, as a result of the head injuries.

g. The trio of Messrs Nehemiah Adejoh, Igbekele Folorunsho and Festus Gbayegun were immediately detained at the Air Provost Wing, 453 Base Services Group Kaduna as investigations began. They were subjected to Toxicology Tests at the 461 NAF Hospital but no traces of alcohol or psychotropic substances were found in their systems. It was however discovered that the driver of the vehicle, Mr Nehemiah Adejo, did not have a valid driver’s license.

h. Traffic Officers from the Kawo Police Station and the Kaduna State Police Command as well as Road Traffic experts from the Federal Road Safety Corp were also called in to provide support during the investigation.

4. Having carefully considered the foregoing, the preliminary investigation concluded that:

a. The death of Flying Officer Arotile was caused by blunt force trauma to the head and significant bleeding resulting from being struck by the vehicle.

b. Being a civil case, the matter will be handed over to the Nigeria Police with a view to further investigating and charging the suspects to court in accordance with extant laws.

5. The Nigerian Air Force, being a highly professional and disciplined organization, will not join issues with any individuals or groups regarding the spurious allegations of ‘foul play’ espoused in some quarters. Suffice it to say that Flying Officer Arotile was a pride of the NAF in whom the Service had invested massively in terms of resources, time and energy. Consequently, it is ludicrous for anyone to even remotely insinuate malevolent intent on the part of the Service against one of its most prized assets.

6. Furthermore, it is extremely sad and disheartening that, rather than allow the Arotile Family and the Nigerian Air Force to grieve for our dearly departed Tolulope in peace, many have chosen to politicize her death, while others are using the incident to push meritless, misguided ethnic and religious agendas. The Nigerian Air Force wishes to implore everyone to respect the sensibilities of all those who have suffered most by this loss, those who really knew Tolulope – her family, her friends and her Nigerian Air Force colleagues. It is of absolute importance that the memory of this Fallen Hero and our precious child is not tainted by the propagation of misplaced sentiments and wild shenanigans. Before I end this august address, may I respectfully, on behalf of the Chief of the Air Staff, the entire personnel of the NAF as well as members of the Arotile Family, express my profound appreciation to all those who in one way or the other have shown concern, support and sympathy over this unfortunate incident. Thank you for your attention.