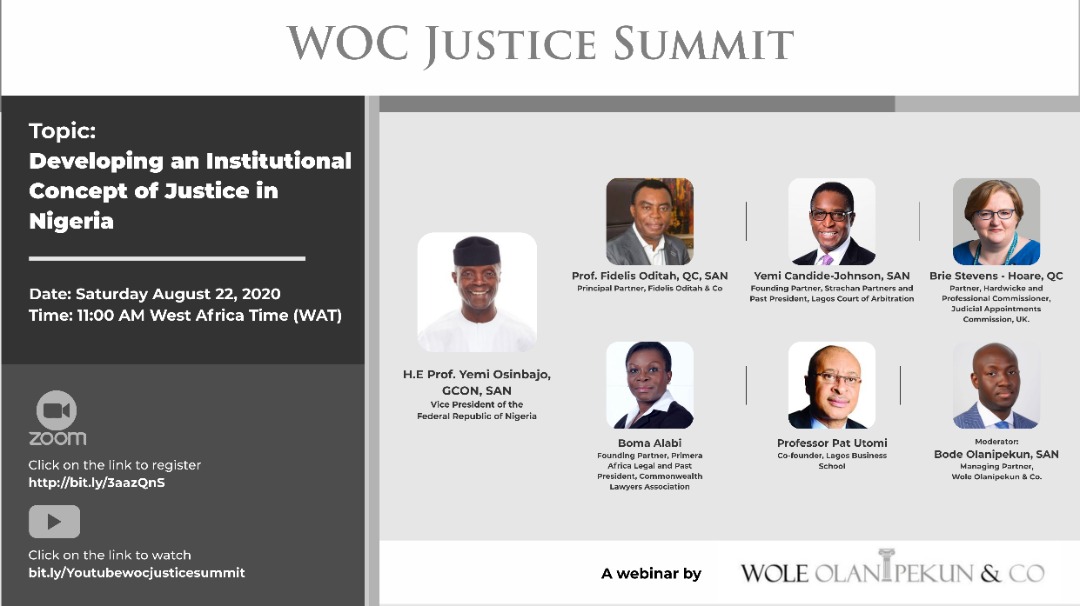 Vice President of Nigeria, Prof Yemi Osinbajo and eminent personalities from Nigeria and abroad will on Saturday August 22, 2020 gather to discuss institutional concept of  justice in Nigeria.

Mr Bode Olanipekun SAN, the Managing Partner of Wole Olanipekun Chambers, the organizers of the webinar said that the aim is to discuss and develop what constitutes the concept of justice for Nigerians. 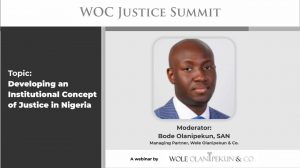 He said: “Within and outside the Nigerian legal space, there are few words that get more constant reference than the word ’Justice.’ The consistency of its recurrence in our lexicon is indicative of the fact that, almost, if not, everyone with a capacity to reason has a perspective of what ‘Justice’ entails. There is also a natural disposition and assumption that whatever misaligns with an individual’s idea of justice would amount to injustice;

In view of the fact that, most citizens have an expectation of, and stake in justice, it is axiomatic that the concept itself and the vehicles for its delivery are communal and national issues that require a consensus (from, at least the majority) as to what the acceptable standards should be. It is for these reasons that Wole Olanipekun & Co. (WOC) has assembled a team of leading industry players and stakeholders in the justice sector to constructively engage in a solution driven discussion towards developing an institutional concept for justice;

WOC has been an active participant in the justice sector in the last four decades. Over the that period, we have built relationships that are now being leveraged upon to put up this summit as part of our contributions towards building, not only a lasting justice institution for Nigeria, but also one that satisfactorily adapts to the ever changing needs and expectations of citizens anchored on consistent and acceptable principles.

Below are the eminent persons the Chambers have gathered for the discourse. 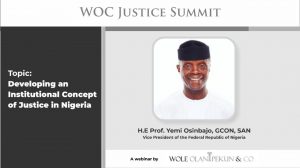 His Excellency, Prof. Yemi Osinbajo, GCON, SAN is currently serving a second term as the Vice President of the Federal Republic of Nigeria. Prior to holding elective office, he held key positions in public service relating to the legal profession, including as an Adviser (Legal and Litigation) to the then Attorney-General of the Federation and Minister of Justice, Prince Bola Ajibola, KBE, SAN and as Attorney-General and Commissioner for Justice of Lagos State. He has also been a member of the Body of benchers, Council of Legal Education and Judicial Service Commission of Lagos State for eight years amongst other statutory and regulatory bodies in the Legal Profession.

A Professor of Law of many decades standing and one-time Head of Department of Public Law, University of Lagos, Prof. Osinbajo, GCON, SAN has combined an outstanding career in the academia with enviable success in Legal practice – earning the rank of Senior Advocate of Nigeria in 2002.

As a much sought-after public speaker, Prof. Osinbajo, GCON, SAN is a respected voice locally and internationally on issues that relate to justice delivery and judicial reforms. At WOC, we are proud that he has been a long-time ally of our Firm and he will be speaking at our Justice Summit and also taking and responding directly to questions from the public. 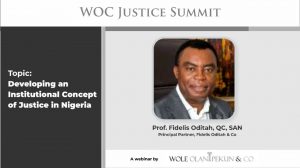 You should also READ  Osinbajo, Olanipekun, others back journalists on coverage of virtual court proceedings

Professor Fidelis Oditah is a household name in the legal profession in Nigeria and beyond. He graduated with First Class Honors from both the University of Lagos and the Nigerian Law School and holds a PhD from the University of Oxford with an enviable record of completing his thesis in only two years. He has been a visiting professor at the University of Oxford, Faculty of Law since year 2000. He is both a Queen’s Counsel and Senior Advocate of Nigeria.

Professor Oditah will be the lead speaker at the WOC Justice Summit and he will discuss how the universal abstract concept of justice can be localized into a Nigerian concept such that, both successful and none successful litigants will leave the Courts with the right sentiments. He would also be discussing how to build institutional models that would last and deliver value. 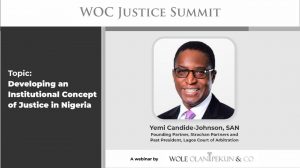 Yemi Candide-Johnson has been practicing as a lawyer in Nigeria for over three and a half decades. In that period, he has been featuring prominently in various courts, tribunals and other dispute resolution proceedings, such that he has hands-on experience as to the issues at stake in our justice system. He is reputed for his principled and vocal stance in relation to important issues; a reputation that has made him a force and voice to reckon with.

He would be speaking at the WOC Justice Summit 2020 on issues that relate to improper considerations that influence Judicial outcomes and the role of the Bar in influencing/enabling these considerations as well as the factors that should influence appointment of Judicial officers (from a practitioner’s perspective). 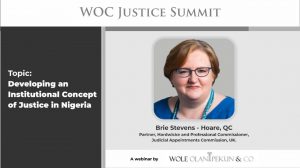 Brie is a variously celebrated UK Barrister and recently won Barrister of the Year Award at the Modern Law Awards 2019. She has been described as a strong litigator that is very impressive, thorough and a force to be reckoned with in the Court room, particularly when it relates to heavy weight and very contentious work. She has been practicing as a Barrister for over three and a half decades and became a Queen’s Counsel in 2003. She sits as a bencher in the Lincoln’s Inn. Significantly, she was appointed as a Professional member of the Judicial Appointments Commission in the United Kingdom on 9th April, 2018.

She would be speaking at the WOC Justice Summit 2020 on the considerations for appointment of Judicial Officers in the United Kingdom and factors that influence judicial decisions in the UK, amongst others. 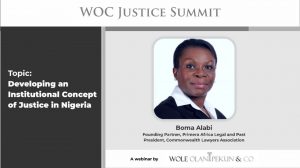 Boma is an established and respected figure in the legal space nationally and globally. With about three decades of experience advising on leading commercial deals in the United Kingdom and across Nigeria’s real estate and infrastructure, manufacturing, telecommunications and maritime sectors, (to name a few). Boma’s views are taken very seriously as a practitioner with extensive hands-on experience. She is an experienced Arbitrator, an accredited Civil and Commercial Mediator and a Tax specialist. She receives constant primary feedback from corporate entities on the experience of the Nigerian justice system. Boma has also won several awards including Award for Distinguished Service to the Legal Profession 2012 at the Nigerian Bar Association Lagos Branch Awards.

Among several Legal inleadership positions, Boma has been President of the Commonwealth Lawyers Association and Chairwoman of the Association of Women Solicitors of England and Wales. She would speak on the right structures that would ensure appropriate judicial outcomes. 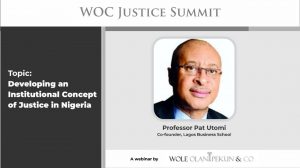 Professor Utomi serves as an Independent Non-Executive Director of Mutual Benefits Assurance Plc., Member of The Advisory Board of CBO Investment Management and has served in senior positions in government, including, as an adviser to the President of the Federal Republic of Nigeria.

Professor Utomi obtained a first-class degree in mass communications at the University of Nigeria, Nsukka, Nigeria and also holds an MA, MPA and PhD in political economy and is the author of several Management and Public Policy books. His academic background covers a range from Policy Economics, Business and Political Science to Mass communications. He has been a scholar-in-residence at the American University in Washington DC and the Harvard Business School and was appointed Professor of the Social and Political Economy Environment of Business and Entrepreneurship.

Professor Utomi was candidate for President of Nigeria in 2007 and 2011. A fellow of the Institute of Management Consultants of Nigeria. As leader of Civil Society, he is the founder of the Centre for Values in Leadership; and the Concerned Professionals, among other social sector enterprise initiatives. Professor Utomi is active on the International speaking circuit, especially on the subject of High growth economics and leadership.

Professor Utomi will participate in the WOC Justice Summit from an end user perspective since he has been a litigant in Nigerian Courts and will also offer perspective on institution building applicable specifically to the Justice delivery sector.