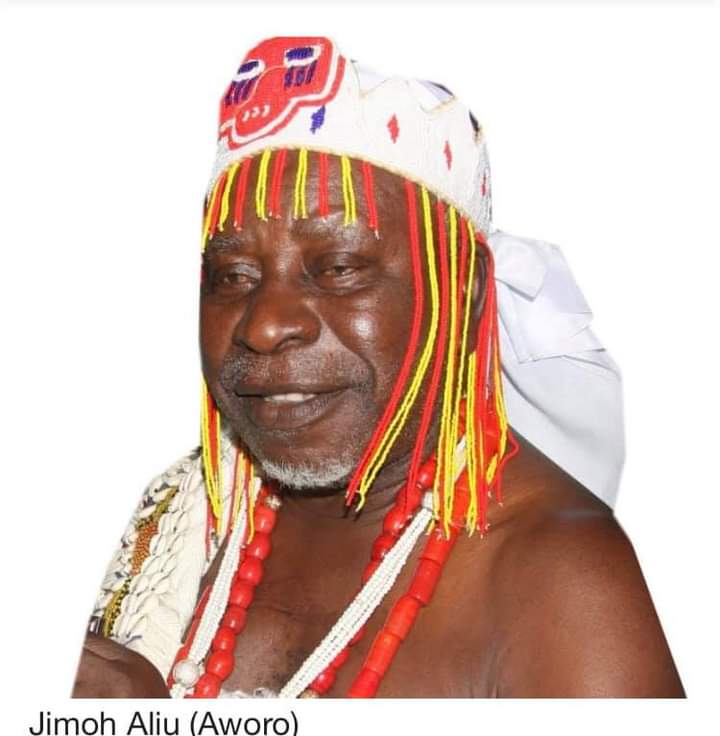 Chief Jimoh Aliu bade farewell to the mundanities of life around 2:15pm of today 17th of September, 2020. Since the mid-August Chief Aliu had continued to muse about death. He had started to admonish everyone around him about the needlessness of human struggles as well as bestial and violent schemes to outdo one another.

Sometime in August, the Baba Asa of Yoruba land called me and invited me to his house. I was there twice that week before I could finally meet Baba in a good physical frame. He spoke extensively about his plans for the theatre industry and his plan to compliment the efforts of Ekiti State Government to get the practitioners of the theatre in Ekiti back to productive theatrical business. He told me he wanted to sponsor five films including his personal bio-documentary.

He gave me a script of a movie he wanted me to direct for him being first of the five proposed movies. I took the script home and was astonished at the heavy metaphysical content of the movie script. I went back to Baba to tell him I really didn’t understand the message he was trying to pass across. He told me he wrote the story to admonish people on the importance of the living taking care of the dead. He said such would also make the dead reciprocate favourably and bless whoever does honour to the dead. He told me taking care of the dead begins with giving respect to anywhere the dead is laid to rest.

You should also READ  Road to Hell! Motorists tell tales of woe on Lagos-Abeokuta Expressway

I became suspicious when Baba took me round his house and said he had decided to give it to government or any government institution that might be ready to turn it to a museum. I asked Baba why he was talking of giving away his property. He looked at me and laughed. He said most of his children had edifices far more luxurious and beautiful and that his house might be left for whoever cares to occupy it.

I adjusted Baba’ script and we shot “Olowo-ite” ( the man whose wealth comes from the burial sites). Baba acted two scenes. He acted the spiritual sage and the omnipresent narrator from whose perspective we are to see everything that had happened to the protagonist. Baba got to the Fajuyi Burial ground, one of the locations for a couple of scenes. He looked round silently in tacit appreciation of the nothingness of life.

He was supposed to eat “Akara” but while the cameramen were getting ready, he chose to squeeze one on the floor while sitting pensively on a burial monument. When the makeup artiste queried him on why he was doing that, he simply smiled and mumbled some inaudible words to himself that same way, someone would have a feast on his burial site and leave the crumbs for the ants.

I saw Baba last during the last scene of the movie and the last lines I could hear him render was :” nigba kan, eyin yoo rimi, nigba kan eyin ki yoo rimi mo” meaning one day you would all see me; and another day you never see me again”. The solemness of his rendition now begins to make a meaning to many of us.

You should also READ  Why married men eat out

Baba never called me by my name most often. He called me “my director” because I happen to be one of the only two licensed movie directors in entire Ekiti as for now. While shooting a movie in Ibadan last weekend, I received a call that Baba, who had been in coma, woke up and began to ask people around him my whereabout. I returned to Ado but could not see Baba immediately due to loads of work already awaiting my resumption from my short leave. As I was planning to go see Baba at the Teaching Hospital, I received a call informing me that Baba had disappeared the way he did in “Olowo-ite” but this time, may be, he would never reappear.

Baba Jimoh Aliu was an enigma. He never attended any school but rose to become an international figure. He danced where angels fear to thread. He made his mark and made himself unforgettable. Adieu Aworo! Adieu Olowo-aye, the son of Ajekunrin. Rest on.

Adelusi is Director of Culture in Ekiti State Civil Service.