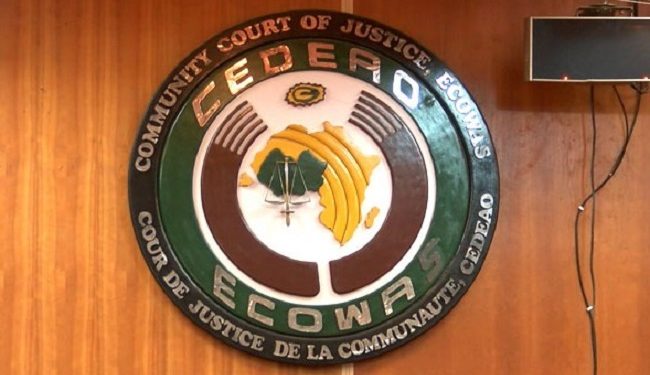 A $37billion dollar suit in damages filed by 11 persons representing eight oil producing communities has been allotted October 27 date for hearing by the ECOWAS Court of Justice.

The plaintiffs, who are representing communities in Abia, Akwa-Ibom, Bayelsa, Cross-River, Delta, Edo, Imo, Ondo and Rivers States of Nigeria in the case, claimed that the Defendants were flaring natural gas as a result of exploration, drilling and production of crude petroleum oil in these states.

In the suit with no ECW/CCJ/APP/34/18 filed by their Counsel, I.O Ugwueze, the plaintiffs Johnny King and 10 others, alleged the violation of their fundamental human rights and the continuous breach of their right to life through the flaring of associated gas into the air in their various communities.

In a statement on Tuesday, the court said that the plaintiffs sought compensation for the alleged environmental degradation, pollution and health hazards caused by natural gas flared through oil exploration.

The Justice Edward Amoako Asante –led fixed the date, to enable Counsel to the Plaintiffs file the application for amendment of processes properly.

The court had on May 16, 2020 at a virtual proceedings upheld the preliminary objection of tje defendants.

The court also struck out the names of the seven oil companies and the Minister of Petroleum and the Attorney General of the Federation who were joined in the case.

The plaintiffs argued that this causes heavy and intolerable pollution of the communities’ environment, emission of poison and toxins into their air.

Land and drinking streams, rivers and seas which they inhale, drink and eat causing strange and mysterious illnesses that gradually kills them.

The plantiffs claimed that the flaring activities were causing environmental degradation, pollution and health hazards to the communities.

They are therefore seeking for an order that the sum of 37.5 billion dollars as general damages against the Defendants jointly and severally to be paid to the residents and members of the communities of the states.

The compensation also relates to the breach of the Applicants’ fundamental Rights to life and/or dignity of human person and the wilful breaches of their fundamental rights.

The plaintiffs urged the court to issue a perpetual injunction restraining the Respondents by themselves or by their agents, servants, contractors or workers or otherwise howsoever form, from further flaring of gas in the Applicants’ communities, among others.