Adegboruwa’s position was confirmed by the Chairman of the panel, Hon Doris Okuwobi, a retired judge of the Lagos High Court, who said in the report: “The atrocious maiming and killing of unarmed, helpless and unresisting protesters, while sitting on the floor and waving their Nigerian flags, while singing the National Anthem can be equated to a ‘massacre’ in context.”

Okuwobi’s comment is contained on page 294 of the panel report submitted  to Lagos State Governor, Babajide Sanwo-Olu, on Monday, who promised to make public the white paper of the report in two weeks time.

The panel detailed how at least 48 protesters were either shot dead, injured with bullets wounds or assaulted by soldiers who stormed the Lekki toll gate on the fateful day. The report also confirmed that soldiers of the Nigerian Army had their vans parked at the Lekki Toll Gate and removed as many bodies and corpses of the fallen protesters which they took away with their vans.

Below is Adegboruwa’s statement on the report:

The Lagos State Judicial Panel on #EndSARS has today, November 15, 2021, submitted its report to the Lagos State Government, in a brief ceremony at Government House, Alausa, Ikeja, Lagos.

The Panel was inaugurated on October 19, 2020, to look into complaints of citizens against human rights abuses by the police. Following the incident at the Lekki Toll Gate on October 20, 2020, the Terms of Reference of the Panel was expanded to cover that incident.

The Panel sat for well over one year, listening to testimonies of petitioners, their witnesses, experts and lawyers. The Panel divided its assignment and report into two principal segments to cover general cases of police abuses and the special case of the Lekki Toll Gate Incident.

Compensation was paid to deserving cases of police abuses while a special case was made for victims of the Lekki Toll Gate Incident of October 20, 2020.

True to his word, the Governor of Lagos State granted total independence to the Panel, as we worked according to our conscience and based upon our common convictions.

Specifically for the Lekki Toll Gate Investigation, we set up certain crucial issues for determination, as to whether:

The Panel answered these questions truthfully, frankly and courageously, based on the evidence led before it, believing that the crimes against humanity that took place at the Lekki Toll Gate on October 20, 2020, would never happen again in our nation.

In particular, the Panel affirmed the rights of the people of Nigeria to constitutionally guaranteed freedom of lawful assembly and peaceful protests, freedom of association and freedom of expression.

The Panel made far-reaching recommendations concerning the major actors that were found culpable, in order to achieve true healing and reconciliation.

Although I have my own copy of the report of the Panel, I will trust His Excellency the Governor of Lagos State to fulfill his promise to Nigerians to make the findings and recommendations of the Panel public. That is the only way to build a true nation and avoid a repeat of the atrocious acts of security agencies against our people, especially the youths, the vulnerable and the helpless.

I thank the Government and people of Lagos State, fellow Panel members, the Nigerian Bar Association, Civil Society, our Comrades far and near, the media and all those who inspired and encouraged us on the path of truth and justice.

At the presentation ceremony today, the Governor promised two things:

1. To set up a Four-Man Committee led by the Honourable Attorney-General to prepare a White Paper for the purpose of implementing the findings and recommendations expressed in the report and to give it legal backing; and

2. To send the report to the National Economic Council for implementation.

It is my view that Lagos State having appeared before the Panel as a party, having tendered documents before the Panel and led witnesses to take a position on the Incident of the Lekki Toll Gate, it will be unfair and improper for Lagos State to be a judge in its own cause, by seeking to review the report of the Panel. However, the Governor explained to me that this would only be done to enable the government implement the findings and recommendations of the Panel and not to tamper with it or mutilate it. I believe His Excellency.

I will however keep observing the turn of events and at the appropriate time, one may be forced to state the FULL contents of the report if the promises made are not fulfilled.

I can NEVER and will NEVER subscribe to anything that would amount to covering up the report of the Panel.

We have done our work in the best way that we could. Nigerians should demand for justice against all culprits who have been named in detail, in our report. 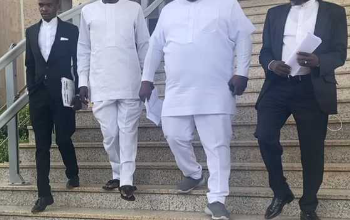