The trending narrative of one prominent person said to have shot another person into limelight has exposed many things about Nigeria’s current state of backwardness. Sadly, such kind of narrative is making rounds among those who are supposed to be educated, enlightened and civilised. The whole concept of Mr. A making Mr. B has revealed the level of retrogression and mediocrity entrenched in the thinking of many, high and low in social status.

This pitiable state of thinking didn’t start overnight. Some decades ago, social standards, educational standards and performance standards at the workplace began to “be diminished.” By (being diminished) this, it is implied that it was done on purpose. People began to corner or obtain privileges and positions by who-knows-who instead of merit and elevated mediocrity over meritocracy. As a country, we are now living with the consequences: in our private and public lives, in government, corporate establishments, hospitals, universities, military,.media and as many other organisations as you can possibly imagine.

President Goodluck Ebele Jonathan was trying to define corruption, by giving illustration, but he was shut down then by partisan critics who wanted to ‘sound’ (but definitely not look) clean. Benefit of hindsight has revealed many things about them already. Decades ago, the practice of sending a potential beneficiary of a privilege to the benefactor became popular with the pervasive use of complimentary cards, with short notes and signatures at the back. Many individuals were this “made” by the corrupt “makers” who formed the habits of sidestepping rules or protocols and relied more on social connections and influences in getting people who are not qualified into positions. We are living with and seeing the consequences all over the place: from judges who cannot interpret attorneys’ submissions well, to doctors that misdiagnose medical conditions, to police officer at the top level who cannot read a simple speech without stammering, rambling and repeating the word “transmission” over and over again, to professors professing emptiness in an academic environment.

The cost of one “made” the other, though seemingly intangible, is heavy on Nigeria as a nation. It has done a lot of irreversible damage even to the body polity of the country. Peter F. Drucker, an erudite management thinker and author of so many books on management, wrote about the effective executive, one who is able to harness material and human resources to get things done. In the book “The Effective Executive,” Drucker argued concerning the knowledge worker, thus: “he is effective only if and when other people make use of what he contributes.” Not done, he wrote that “an oganization is a means of multiplying the strength of an individual.” But the converse is also true. If the person is a nonentity, an organisation helps to magnify his weakness. We have seen this on display at various levels in this country called Nigeria. And also, we have seen how de-industrialisation has killed the vast opportunities of many individuals to work in formal settings and thereby hone their skills and become prominent. Rather, unemployment is at record high and many graduates through a generation, from mid-1980s to date have never even had a single opportunity to get formal employment, let alone develop and shine. They waste away ultimately and many voted with their feet, looking outside Nigeria for greener pastures, in what you call brain drain.

Drucker continued by pointing out that an effective executive takes the knowledge worker’s “knowledge and uses it as the resource, the motivation, and the vision of other knowledge workers.” He wrote further that each knowledge worker has his own skill and his own concerns, “one man may be interested in tax accounting or in bacteriology, or in training and developing tomorrow’s key administrators in the city government.” He referred to the people who are most important to the effectiveness of an executive, pointing out that “unless the executive can reach these people, can make his contribution effective for them and in their work, he has no effectiveness at all.” And, as often said (even in our traditional African parlance), a tree cannot make a forest and no man is an island.

What sense, therefore, is there in the claim that someone made another to become a greater personality? The person at the top echelon is at best a coordinator of human and material resources for achieving a specific purpose. He cannot achieve anything if he doesn’t have the right, loyal and helpful lieutenants at his neck and call. In many cases, it is these subordinates that put their own lives, families and reputation at risk while ensuring that their bosses look good. A leader who sees himself an achiever should therefore not fall into the self delusion of ascribing to himself a larger-than-life image, neither should he regard himself as an extraordinary person with an outsized personality or one that has such a midas touch. Worse still, he should avoid the arrogance of projecting himself, or allowing himself to be projected, as one who makes others to become somebody.

Meanwhile, such individuals need to be reminded that they are instruments in God’s hands to do what they do, and that others will do even better for such people if they refuse to, in the first place. For those familiar with the US politics of the 1980s, it is tempting for those with “I made you” mentality to think Ronald Reagan extraordinarily swept his way into, or sustained himself at, the White House by his singular efforts.. James Baker III was initially a White House staff during Reagan’s first term. But he was such a powerful and influential subordinate that played a significant role in Reagan’s re-election. He got rewarded by becoming secretary of state in Reagan’s second term, but was also instrumental in bringing Alan Greenspan to become the Fed chairman, and Greenspan proved his mettle by serving four presidents successfully before eventually retiring at such an advanced age, proving Baker’s choice right. But, how many times was Baker praised for his skills when Reagan was receiving the accolades?

It is a hackneyed, puerile and rather mediocre logic to just dwell on the fact one person with a presently superior standing made another. It ignores the fact that the so-called “maker” of others must have been helped to become great by the one “made” or he himself was earlier “made” by someone else or some people. It also ignores the fat that there is so much opportunity out there for anyone to shine ever so brightly, especially if unhindered. The trouble with Nigeria has been past and present political leaders who have low shoulders on which others could not stand to aim and fly higher. Many of them have killed initiatives, inventions, innovations, great ideas and chances of many others. So, it now looks like extraordinary whenever few single individuals break free from the golden shackles of narrow horizons and restricted world views to emerge as global citizens. In some such cases, heavy prices must have preceded such achievements. We should be looking at a country in which prosperity and development are spread widely and spread fairly, not one in which it becomes a rare privilege for anyone to stand out from the madding crowd and that person has to do hero worship for the opportunity to become an achiever. 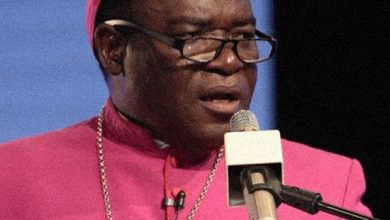 Jesus lost elections, so can Bishop Kukah lose to Buhari